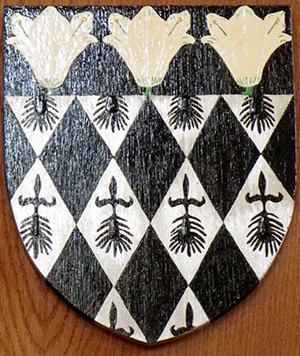 A provisional narrative landscape history by I.G. Simmons with major contributions by Patrick Mussett and additional work by Meryl Foster; made possible by the encouragement and financial support of the late Arthur Owen, FSA.

This website reflects about 10 years' worth of post-retirement investigations into the landscape history of the area around Wainfleet in Lincolnshire. It tries to assemble the evidence for the period from the Anglo-Saxon occupation of the land until the eighteenth century and to interpret the history in a narrative form. It would take a couple of books to accommodate the 200,000 words and 150 illustrations so that this format seems preferable. There is a lot of detail that is more like a PhD thesis rather than a book so I hope that people will use the website as a resource that can be quarried and that they will in turn go to the sources so that better accounts will eventually emerge. The maps, for example, are sketch-maps rather than finished cartography: make better ones, readers! Because only a little thorough work has been done on the area, my interpretations are necessarily preliminary and provisional, but there has to be a beginning somewhere. Because it is unlikely that anybody will read the whole text, some parts are repeated but in different sections. One advantage of the present format is that it can be updated as new ideas and data emerge, and so users should keep their eye out for changes. I also intend to publish some of the work in conventional journals and these are listed.

As my Introduction says, the land between Skegness and Boston is not a high-profile stretch of country. Those two towns are well-known but in between the stretch of terrain from the sea to the Wolds is now given over to intensive agriculture and its servicing with a secondary nod towards the holiday industry of the coast north of Skegness. For me, though, it has a different set of charges since I was evacuated there at the age of three to escape the London blitz. So I spent the war years (on and off as the bombs, V-1s and V-2s came and went) on a farm on the edge of the East Fen and since it was with relatives I continued visiting right up until the 1950s; an uncle was landlord of a local pub for a time. So when I take people there, I have always seen more than just a stretch of well-drained farmland and now I see into several hundred years of landscape evolution as well.

In shifting from research into palaeoecology and large-scale environmental history to regional-scale chronologies based on documents, aerial imagery, maps and a limited body of published work, I have necessarily leaned heavily on other people's expertise, though none of them should be blamed for any deficiencies which emerge. At the outset, I was lucky enough to be in contact with the late Arthur Owen FSA, who published a great deal on land history and drainage in the counties around the Wash. He was not only encouraging (and a pleasure to be with especially in the field) but also gave some money to Durham University which I have been able to access to underpin this work. A major expenditure has been the inspection, transcription and translation of a large number of original documents, many of them in archives such as The National Archives at Kew, The Bethlem Royal Hospital, Lincolnshire Archives, and Magdalen College Oxford. The acquisition of aerial imagery gets cheaper by the year but the RAF photographs from the late 1940s are still a huge resource and still quite costly. Field visits have also needed financing even if there is no local temptation in the shape of 5-star hotels. So Arthur's money has, I hope, been sensibly spent. This is the point to say that my wife Carol has lived patiently with the project from its beginning and borne the wet days in the field, as well as doing a great deal of driving along narrow and often rather uneven lanes.

The documents are the foundation of the work from about 1150 onwards and their contribution has relied on the skill, expertise and tenacity of Patrick Mussett. Every sentence of every part of this work that deals with the period from about the mid-twelfth century to the 1700s when something of a (rather indistinct) terminal line is drawn is likely to be underpinned by what he has contributed and so he is a true co-creator. His knowledge not only of manuscripts but of many medieval arrangements has been central. For the last couple of years, Meryl Foster has joined the team and striven to wring the maximum information from seventeenth century sources such as the Barkham Estate papers for Wainfleet St Mary and has shed light on several other problems along the way. The fact that many bodies of documents are now on the Web has done little to obviate the need for real experts in the art of deciphering and interpreting historic records and her detailed analyses of Barkham material will be added in due course. The archivist at the Bethlem Royal Hospital, Mr Colin Gale, has been very helpful indeed in our use of the Wainfleet material.

I have had the pleasure of discussing the progress and some of the findings with a number of other people. In no particular order, these include the late Hilary Healey, whose premature death in 2013 was a serious loss to studies of east Lincolnshire; Tom Lane of Archaeological project Services; David Robinson, doyen of all things Lincolnshire; Martin Redding of the Witham 4th District IDB, Mark Bennet of the Lincs HER, Teresa Maybury, Andrew Fielding, Tom Williamson, and Ros Beevors, who edited some preliminary pieces for the LHA's Lincs Past and Present. Tom, Martin and Mark have all been generous in sharing data and ideas. Discussions with Brian Roberts, Terry Slater and Rob Wheeler have always been enlightening. The staff of the aerial photographs collection at the NMR in Swindon have been unfailingly helpful in finding and sending photographs. At the LAO, queries have been answered promptly and copies sent exactly as ordered and within a reasonable time; visits have been made the more fruitful by the staff's patience with neophyte users of documents. Both these units do great credit to their parent bodies. Landmark Information Group have been very generous with allowing use of their nineteenth century Ordnance Survey maps, accessed via the ever-helpful Digimap service hosted by Edina. At the Bethlem Hospital Archive (now the Bethlem Museum of the Mind), which is the repository of a great deal of Wainfleet St Mary material, archivist Colin Gale has been extremely helpful over a long period.

The production of the website out of a mass of text and diagrams (mostly in the 'wrong' programs) is the work of Steven Allan of the Department of Geography; he has undertaken this in the interstices of his work for those in post and I am very grateful to him for his skill and application; I want also to thank successive Heads of Department for allowing this use of facilities.

So with many imperfections, here is an interpretation of the evolution of the landscape of Wainfleet and its nearby area from about AD 500 to 1800. The land and its people is embedded in my memories and I hope they will have spurred others to investigate and make available even more knowledge of the region's history.

The material from the Barkham papers at Bethlem Royal Hospital Archive is currently being examined in much greater detail by Dr Meryl Foster. In due course the results will appear on this site and will supersede much of the discussion of Wainfleet St Mary in Section 2.4. The present account is allowed to remain here so as to carry forward the story but it will be modified by new analyses of the papers from the Barkham estate and Wrangle in the seventeenth century.

For the present, please note that there will be a series of amendments to the text and illustrations, ordered by date and notified here. At some stage there will likely be a wholescale revision of the text (I should live so long) and this will be heralded at the beginning of the whole site. At April 2015, the following offshoots from the website have appeared or will do so in conventional print sources:

(with Patrick Mussett) Luxury living at Bolingbroke Castle in the Thirteenth Century, Lincs Past and Present #96 (Summer 2014) 14-16