MA in Languages, Literatures and Cultures

Eman is 23 years old and a graduate in English Language and Literature of Bethlehem University. She took the German International Abitur and later taught at the Talitha Kumi school in Beit Jala. Currently she is volunteering as an English language tutor at Bethlehem University.In Durham, she will join the MA programme in Languages, Literatures and Cultures. Her long-term career plans are to promote the study ofworldliterature in Palestinian universities.

Her commitment to study languages and literature arises from her conviction about the importance of inter-cultural communication in a world of cosmopolitanism and globalisation. She speaks Arabic, English, French, German and Turkish. She regards the study of literature as an important way to bring about social and political reformation. It inspires creative and critical thinking and promotes cultural dialogue across boundaries.

She enjoys theatre and has worked with a theatre group in Bethlehem as a stage and production assistant. She has worked with voluntary organisations in her country that seek to promote democratic values and has led visitors to Palestine to meet people and understand the living conditions and innovative work that goes on in the Dheisheh refugee camp. In this context she has translated the texts of several video films and other documents.

In Durham, she looks forward to creating opportunities to talk to people and groups and write about her country to help others understand its literature, its culture and its problems. From her work as a classroom teacher, she has developed an interest in the ways educators can help in the mediation of conflicts and in creating learning environments both within and beyond schools in which students will be inspired and motivated to deepen their interests in learning.

Marah is a graduate in Computer Engineering from An-Najah National University in Nablus. She is 27 years old and grew up in the West Bank city of Qalqilya. During her undergraduate career she received a Presidential Scholarship for outstanding work. In Durham she will study for her MSc in Scientific Computing and Data Analysis.

After graduation, she worked for four years in technology companies gaining practical experience in software programme and hardware design as well as the confidence to work creatively with others in teams.

She looks forward to a future career in research in the technology field and to promote new ways of disseminating this knowledge to benefit communities in her country.

She enjoys reading, especially in the fields of data science and artificial intelligence.

Outside her studies, she hopes to learn more about higher education in the UK and especially about ways in which new ideas about teaching and learning in her field can be introduced into technological education in Palestine. 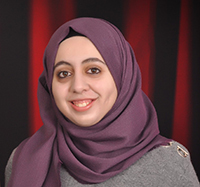