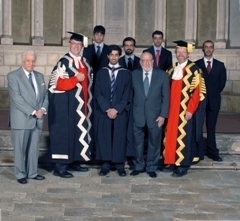 Congregation 2007 saw the graduation of Sheikh Khalid bin Zayed bin Sultan Al Nahyan of Abu Dhabi. Sheikh Khalid, standing to the left of Vice-Chancellor Professor Chris Higgins, is the youngest son of the late Sheikh Zayed, who founded and became president of the United Arab Emirates in 1971. Sheikh Khalid graduated with an MA in Research in Arab People and the Early Islamic Period and has recently begun his doctoral degree at Durham University's School of Government and International Affairs.