In 1788, Parliament sought to regulate the slave trade by imposing restrictions on the number of Africans that a ship could carry across the Atlantic. A famous diagram showed the slave ship ‘Brookes' carrying 454 Africans, which was its regulated number. Abolitionists used this image to expose the appallingly cramped conditions below deck. In fact, the ‘Brookes' had carried as many as 609 Africans on earlier voyages. 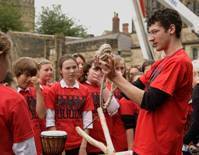 On Friday 13th July 2007, 274 young people from North East schools commemorated the 2007 bicentenary of the abolition of the slave trade (1807) by recreating the slave ship ‘Brookes’ on Palace Green in Durham City, between the Castle and the Cathedral. Lying on a full-size print-out of the ship’s hold, the young people took the places of the 248 slaves who would have been packed into this part of the ship for the transatlantic Middle Passage.

The project was devised by staff from the Durham University Library Heritage Collections, which hold some of the best collections of material on slavery in the North East, to enable young people across the North East to learn more about the slave trade in an exciting and innovative way. As well as focusing on the realities of the slave trade, the project looked at the impact it had in the North East, and drew parallels with issues of slavery today. The project was supported by a £25,600 grant from the Heritage Lottery Fund.

Young people from schools in Wallsend, Ryton, Willington, Durham and Chester-le-Street, all put on red T-shirts  bearing an image of one of the slaves in the diagram and recreated the slave ship. At precisely 11:30am, Education Outreach Officer Sarah Price rang a ship's bell for a minute's silence to remember the sufferings of the slaves. In order to get the image head-on, aerial shots were taken which were shown on the local television news later that day. The young people then attended workshops in Durham Cathedral on slavery and the rights of children today.

"The aim of the project was to give the young people a chance to reflect on the horrors of the Middle Passage and leave a long-lasting impression upon them", said Education Outreach Officer Sarah Price, "and we are now helping schools create their own e-learning resources based on the event and the historical background". All the schools involved already used Durham University Library's Heritage Collections schools website, which gives Key Stage 3 and 4 pupils (aged 11 to 14) the chance to explore issues around the slave trade (and other historical events) by referring to original historical documents on-line.

Schools, museums and other organisations wanting to borrow the whole slave ship (with 274 slaves marked out) or the detachable stern section (with 27 slaves marked out) should contact Education Outreach Officer Sarah Price at Durham University Library on 0191 334 1213. The ship is the perfect starting point for workshops on slavery topics related to history and/or citizenship, and Sarah is happy to advise or help run sessions.

Durham University Library is also collaborating with Peter Kayode Adegbie on Changing Perspectives, an intergenerational project looking into the collective consciousness of Black African and Afro Caribbean people in the North East in order to present their response to slavery, its abolition and other forms of slavery today.