It's in his nature 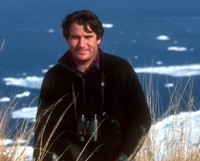 The celebrated and award-winning director, Alastair Fothergill, has worked on some of television's most memorable wildlife documentaries, including The Really Wild Show and Wildlife on One. Now setting a new benchmark for exceptional documentary making, Alastair has produced the outstanding Blue Planet series and the more recent Planet Earth series. His work has contributed substantially to public understanding of science and to a sense of responsibility for the global environment.

Alastair talks to Durham First about his passion for the natural world which brought him to Durham to read Zoology, his projects and experiences filming nature and wildlife, and working with Sir David Attenborough.

What is your fondest memory of your time as a student at Durham?

That's a leading question! I'd probably say two different things: I enjoyed my social life and making new friends but from an academic point of view it was while I was in my second year of reading Zoology that the opportunity arose for me to do some field research in the Camargue (France). This was organised by the late Prof Peter Evans and it was the first time I did any filming of wildlife.

How did your degree influence your choice of career?

I always knew since I was a little boy that I wanted to work with animals and it was very obvious to me that I would need to read Zoology. I initially thought that I would become a research biologist but this changed whilst I was studying at Durham University. I got the chance to make my first ever film which was entered in a competition (the Mick Burke Award), run by the BBC. Mick Burke was a high-altitude cameraman for the BBC who died on the south-west face of Everest and the award, created in his memory, was an annual competition for expedition films from a variety of young climbers, naturalists and explorers. I made a film about the Okavango swamps in Botswana and I knew straight away that this what I wanted to do. It was combining a love of natural history with an increasing love of communicating that passion.

What was your first job after leaving Durham?

I was very lucky when I finished my degree as I was taken on by the BBC where I very quickly became a researcher on the very first series of The Really Wild Show.

Tell us a little bit about your early years at the BBC and some of the shows you worked on.

I spent the first four to five years working largely on children's programmes and that was fantastic because I learned all sorts of techniques really quickly. I love making wildlife films for children although they are some of the hardest ones to make. I then worked on Wildlife on One and then worked with Sir David Attenborough on Trails of Life which was a big series on animal behaviour. I then produced my first series of my own, Life in the Freezer, which was a study of the seasonal cycle of Antarctica.

You have been fortunate to work with Sir David Attenborough on many projects. What was it like working with Sir David, and what did you learn?

It was an enormous pleasure and inspiration to work with Sir David. He is a wonderful man, just as nice in person as he appears on screen. He is also very demanding. He expects everything at a professional standard and that is very encouraging. You have to work hard but it's nice to be challenged and to work with someone with such skill. He is an amazing communicator at every level and he has inspired many people that work at the Natural History Unit here in Bristol.

You were appointed Head of the BBC Natural History Unit in 1992. What ideas were you able to implement and what significant achievements were you the most proud of before standing down in 1998?

At 32, I was the youngest ever head of a BBC department which was obviously a little daunting and the timing wasn't altogether right as I was happy filming in field. However during my time as head of the department, we doubled the size of unit and the amount of work, which was a great achievement. During my time in charge, a lot of new programmes were created including The Private Life of Plants and Big Cat Diary. I also developed the Natural History Unit into a bi-media department, creating strength out of TV & radio working side by side.

To the viewer, it is often heartbreaking to see how cruel nature can be. In producing such series as The Trials of Life how were you able to detach yourself emotionally from the subjects you were filming?

Both at the point when you're there filming and when watching the programme, you have to put everything in context. For example, if you film a cheetah killing a fawn it looks pretty shocking, but you have to realise that the cheetah has to do that in order to feed its own clubs. It's all part of the cycle of life. We are very careful to remember, when editing our sequences, that people are sat watching it in their living rooms, sometimes with their children and often when having their supper! We are cautious not to dwell on blood and gore because it is not necessary but equally there is a need to be accurate and true to life.

The first rule of filming wildlife is never to interfere or to get involved. In the series Planet Earth, one of the episodes featured a polar bear that starves to death and people have asked why we didn't give it the walrus it needed to survive. But to feed it, we would have had to shoot a walrus and viewers would not have appreciated that course of action either. Our job is to report nature as it is, not to intervene.

What has your proudest moment been to date?

I am very proud of the Blue Planet and Planet Earth because it is wonderful how people talk to me about them. Not everybody saw the initial broadcast but the release of the series on DVD has created a whole new set of viewers. I have two children and their friends have watched both series on DVD. Parents tell me how important the series are and how their lives have been enriched by the programmes.

You were awarded an honorary degree from Durham University in 2007. What advice would you give to other students at Durham who are interested in a similar career to yours?

I think that it's a wonderful career but it's very competitive. The important thing to remember is that more than anything else this career is about communication. It's about storytelling, about sharing your passion for the natural world with others and so those aspiring to a career in this area should take any opportunity to prove their ability to communicate by writing articles for magazines or newspapers, by filming their own DVDs or by doing radio broadcasts -these are all very useful things to do. The most important thing though is to keep trying and to never give up. Determination is the key.

Transmitted worldwide to vast numbers of viewers, why do you think such programmes as Planet Earth are so popular?

There are many reasons for the popularity and importance of natural history programmes. Part of the fascination is developed because we live an increasing urban life and therefore the natural world is so different. Also, essentially so many media these days are computer-generated, e.g. films and video games. People love the fact that nature is real, that it's out there in our world.

In all of your travels to film wildlife, what animal have you most enjoyed observing, and what has one of your most memorable moments been?

I am particularly fond of chimpanzees; I think they are amazing animals. Apart from the fascination that they are so closely related to us, chimpanzees are interesting as they are intelligent animals who are always doing something, they are so active. They are also quite paradoxical in that they are cute, endearing and warm, but often underneath lies quite a dark character.

A lot of the production, especially on most recent series such as Planet Earth (where viewers had a glimpse of the behind the scenes filming of the series) has been groundbreaking. What do you think the future holds for new productions?

Technology has always been an important part of our work. Advances in photography for capturing the private life of plants & animals have been phenomenal, and aerial photography was at the heart of Planet Earth. What we need for the future is to develop better filming in the dark. Nature does a lot of interesting things at night and we haven't entirely cracked that area. Natural history productions have a long life span yet. You could turn over a log tomorrow in a South American rainforest and find many different species that haven't yet been discovered. We are not running out of stories to tell, as long as we have the imagination to tell them.

And finally, what's next?

I am presently working on a new series for the BBC called Frozen Planet about the natural history of the poles which will be broadcast in 2011, and also a cinema film for Disney on chimpanzees.

Alastair Forthergill was a member of St Cuthbert’s Society from 1980-1983 where he gained a BSc in Zoology.

In 2007 Alastair was awarded an honorary degree (Doctor of Science) by Durham University for his outstanding contributions to the public understanding of Science, for setting new international standards for production in natural history broadcasting, and for promoting public awareness of the biodiversity of life on earth and issues concerned with protection of the natural environment.

Previous versions of Durham First are available in the archive section.