The First Lady of Cranmer Hall 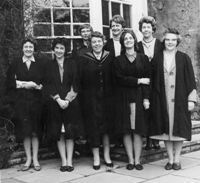 St John's College was formally divided into two parts in October 1958: John's Hall, primarily for undergraduates reading a variety of disciplines, and Cranmer Hall for the training of men for ordination in the Church of England. There was much mingling between the ‘sides', with many ‘Johnsmen' making the transition to ‘Cranmerians' after their undergraduate studies.

At this time, the all-male college focussed on training Anglican vicars, the tone was of ‘gentlemanly scholars', women only allowed by appointment as visitors for afternoon tea. However, from October 1966 St John's was the first Anglican theological college to train men and women together.

The first tutor for women in St John's Cranmer Hall was Mally Yates (née Shaw) who had pastoral responsibility for the women, as well as teaching the Gospels and Old Testament.

Mrs Yates remembers: "In my early months, I felt I was being stretched in all directions but they were made easier by the very supportive attitudes of my colleagues who had all ‘to a man' been in favour of the admission of women and who were ready to help, advise and share the load.

One or two men were quietly missing if a woman was due to read a service and I hesitated for a while before I was sure that the ice was broken sufficiently for me to preach in Chapel. Men were surprised to find at the beginning of the term that they had a woman tutor to whom they were to read their essays, and some said so, but said it so guilelessly and courteously that I couldn't possibly have taken offence".

Now men and women train alongside Anglican, Methodist and independent students for a variety of courses and qualifications, with a range of practical and academic courses taught both in-house, in the Theology department and the Roman Catholic Ushaw College a few miles down the road. Female undergraduates joined the College in October 1973.