This year is a special year for St John's College. In 1909 it was founded by a group of Church of England leaders who wanted to give evangelical clergy the opportunity to train in an outstanding University environment. Those who founded the College would scarcely recognise it today. Its place consistently at the top of student satisfaction surveys, its respect and participation in the North East region, its reputation both nationally and internationally in its expertise in the theological formation of church leaders, and its ability to punch above its weight in academic achievement, sport, music, drama and student politics - all mark a College which is vibrant and confident about the future. 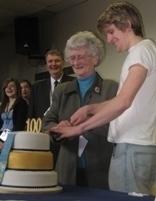 With a set of Principals since 1909 ranging from former and future bishops to a lay female educationalist, to a Methodist astrophysicist, St John's faces the 21st century, retaining its commitment as a unique educational establishment both in Durham University and the Church of England.

St John's centenary celebrations began in February with a special weekend reunion which saw over 200 alumni of all ages return to the College for a series of special events. These included a public concert in Durham Cathedral, a thanksgiving service, public lectures, and a grand dinner followed by fireworks over the river. A couple of formal dinners were held in the following days for current Johnians with guest speakers, Dr Richard Adams and author Catherine Fox. It is estimated that there were over 500 guests over the weekend, including current students, staff and college tutors.

Other celebratory events marking the college's significant social, spiritual and academic achievements included a lecture by the Archbishop of Canterbury Dr Rowan Williams.

"Although St John's is a small college the significant social, spiritual and academic achievements of its staff and students have made a huge impact over the past 100 years. St John's is not simply about its beautiful location and buildings, it is a living history of men and women who discovered the excitement of learning, community, creativity and faith."

1909: St John's is founded, providing an opportunity for prospective ordinands in the Church of England to receive a University education outside Oxford or Cambridge.

1913: St John's expands from its original premises (a row of private houses along the Bailey) into its own purpose built additional accommodation overlooking the river. The new building, Cruddas Haughton, housed over 40 additional students.

1923: St John's becomes a full constituent college of Durham University but even today remains independent both administratively and financially.

Oct 1958: A separate hall within St John's, Cranmer Hall, is formed specifically for ministerial training. Cranmer Hall has been a recognised Anglican theological college ever since. Many studying at John's make the transition to Cranmer after their undergraduate studies.

1976: The UK's first fair-trade shop is set up by a team of students. After using a top floor of the college for the sale of fairly traded goods, a city centre building is then rented, and stalls are run at students' homes.

1980s: A weekly fair-trade stall is held at the Students' Union in addition to the shop in St John's.

1987: St John's expands further with the opening of the multi-purpose William Leech Hall, used for lectures and entertainment.

1988: The Wesley Study Centre is opened in Cranmer Hall for the training of Methodist ministers.

1990s: The fair trade shop is running daily with a 40-strong team of student volunteers, sponsoring children and making contributions to a number of charities.

2000: The fair trade shop is re-branded the ‘Just World Shop', and today continues to sell fairly-traded goods, providing a city-wide outlet and valuable support in the sponsorship of children in the developing world.

Today: Still one of Durham's smallest colleges, St John's is made up of approximately 350 undergraduate and 50 postgraduate students studying for degrees. A further 100 Church of England and Methodist trainee clergy study in Cranmer Hall. The Just World Coffee shop is opened. St John's celebrates its centenary year.

Fides Nostra Victoria A Portrait of St John’s College offers a fresh look at every aspect of St John’s through its first one hundred years – its history, its buildings and gardens, its special traditions and unique atmosphere, its people past and present and their myriad activities. Much more than a history, this is a celebration of an evolving, vibrant community and its values.

A vital element in the book, complementing the central narrative, is composed of the voices of Johnians from many living generations, recalling their experiences of college life – the highs, the lows, work and play, sports, worship, college characters and personalities.

Richly illustrated throughout, this centenary volume will be treasured by all Johnians as a fascinating and lasting record of a very special institution. The book can be previewed and ordered at www.tmiltd.typepad.com/fidesnostravictoria