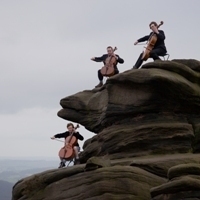 Have you ever climbed to the top of Durham Cathedral tower? Or scaled one of the tallest peaks in the UK and Ireland? Many of you probably have. But have you ever done so carrying a cello, then stopped at the summit to play some Bach? Probably not. Yet in 2003, this is exactly what Durham alumni James Rees and Jeremy Dawson set out to do when they founded the Extreme Cellists, along with a fellow member of Sheffield Cathedral Choir, Clare Wallace. 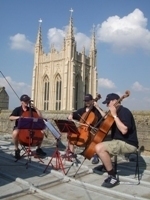 Two of the trio, Jeremy and James, are Durham alumni and both sang in Durham Cathedral Choir and the University Chamber Choir. During his time at Durham, Jeremy also sang in the Choral Society and played in both the main University orchestras, whilst James sang in St John's College Choir and played the cello in the College Orchestra. Since their conception, the Extreme Cellists have taken musical performances to new heights, and depths. Their first ever venture into extreme cello playing (an activity which they define as "a collaborative experience of musical, visual and physical endeavour"), involved performing in six locations of varying extremity: the top of Mam Tor; the Blue John Cavern; Grindleford Station; Padley Gorge; Sheffield University Arts Tower; and Sheffield's Winter Garden.

From then on they have undertaken various challenges in order to raise funds for and the profiles of different projects and charities, including:

So what motivates these cellists to carry out such extreme endeavours?

Jeremy: "The desire to raise funds for good causes - all of the charities we support are ones whose work we admire and believe in. Also, I am a strong advocate of performing music in as many ways and places as possible, and to reach as wide an audience as possible - this is obviously a way of doing that."

James: "Each successfully completed challenge provides a huge sense of achievement. It is great to feel that you have accomplished something which has exhausted you mentally and physically. Most of the challenges which we undertake have never been done before - well not with three cellos anyway!" At the time of going to print, the Extreme Cellists were preparing to run the Sheffield half-marathon whilst carrying their cellos and were planning their next venture - Wainwright's Coast to Coast walk in the summer of 2010.

▸ To find out more about the Extreme Cellists and their challenges please visit their website.