Coming of age: Twenty one years of women at Hatfield 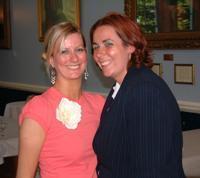 There have always been women at Hatfield, but officially only since 1988 when it went mixed. It is now hard to imagine what the fuss was all about, but debate was fierce at the time. After 21 years, it's good to find out how three early recruits have fared. 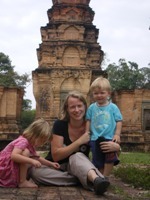 Yolande Wright (née Stowell) attended Hatfield 1990 - 1993. Yolande was lucky to be sponsored by DFID in the mid-1990s to do an MSc on sustainable development and environment - this set her off on a new career track after working for Procter and Gamble. Since then she has worked for DFID in South Africa, Bangladesh and currently Cambodia. Her work helps poor people to lift themselves out of poverty, while reducing their vulnerability to climate change. She and her husband Ken have two young children, and number three is eagerly awaited in May.

Naomi Hart's time at Hatfield (1990-94) included a ‘year abroad' in Cameroon. She then spent two muddy but exhilarating years in Tanzania on a motorbike working for a medical charity before doing a degree in Art and Design. Armed with new skills in welding and glassblowing, she travelled in Australia and New Zealand painting and sketching before returning to Europe. 2008 saw a year of exhibitions at places called Ganges; the exhibition goes to Canada in 2009.

Sasha Herriman writes: "I didn't realise Hatfield had been an all-male college until the year before. Ironic, as my dad was at Hatfield. I was in the second intake of girls - and by then, the all-boy third year realised we'd come to stay. What little resistance there was, was futile! I loved my time at Hatfield - it was a time of opportunity, and the main difficulty was trying to work out what to get involved in because there was so much on offer. Hatfield supported me in so many ways - singing in the Choir, putting on plays, getting funding for expeditions - for me college life enriched my university life adding to the enjoyment of what I'd come to study."

Yolande was the first female "Senior Man". The second to do so, Sam Mowbray, will be elected President of the Hatfield Association at the weekend reunion, 4th - 6th September, the first woman to hold this office. With Sam as President and Yolande giving the after-dinner speech, it should be a remarkable weekend, and we want to see as many Hatfield alumnae as possible coming back to join us. (Men are welcome too!)