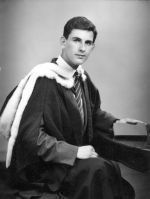 Hunter Davies, renowned author of over 40 books and columnist in numerous newspapers, graduated from Durham University exactly half a century ago.

In the autumn of 2007 he returned to Durham and here describes for Durham First readers the thoughts and feelings provoked by Durham Re-visited.

It's 50 years since I was at Durham, yet in those 50 I have never been back in term time. In fact I've hardly been back at all. Just twice for Castle Reunions which are in the vacations, so you never get a feel of university life today. It's like visiting a museum on a Thursday afternoon, half-day closing.

I've always told myself that one day I'll go back when the students are there, so I can look at the fresh young faces and think: what are you doing in my room, walking down my corridor, taking my seat in the Great Hall, writing stuff for my paper? Bloody cheek.

Probably would never have happened, till out of the blue the Master of University College wrote and said I had been elected an Honorary Fellow, inviting me to a formal dinner in Castle. About ten years ago, my wife got a letter from her old College saying she had been selected as an Hon Fellow. Amongst other things, it would entitle her to free meals at High Table, and a room in Oxford any time she liked, plus her partner. "Sounds good", I said, "free digs". She turned it down flat. She has never been back to her old College, ever, and anyway she is against all honours, however humble, on principle. Funny woman.

I rang Maurice Tucker, the Master, at once and said "yeah, count me in, what an honour. Name the day. Only problem is, if it's a formal dinner, will I have to wear a tie? Not worn one for 50 years". "Don't worry", he said, "we have ties".

He picked me up at the station. I had met him once before at a college reunion and had been amazed then not just by his baseball cap but his informal attitude with everyone, old boys, staff, students. In my day, the Master was such a distant, lofty figure he might have been on another planet.

I was at Durham 1954-58. I have no memory of applying. I just woke up one day and found myself there. One of the masters at my school, Carlisle Grammar School, had said "here, fill in this form, we're sending a coach load to Durham this year." About 80% of the students - all male, of course, in 1954 - were like me, grammar school boys from the North, with a large amount from the North East. About 15% came from the Midlands. Only a handful came from the South. There were probably four or five public school boys, one from Winchester, two from a Scottish public school whose name I never caught. That was about it.

Castle had about 250 students. There were six men's colleges and three for women. In all, the Durham Colleges had 1500. Today there are nearly twice as many colleges and almost 15,000 students. I did nothing for about two years except play sport, shove ha'penny at the Buffalo's Head, drink and generally enjoy myself. Then I woke up. Sort of.

By chance my room-mate was giving up a little job as advertising manager for Palatinate. I said I'd do it, thinking that I would at last have something to put in my CV. I had to go round the shops, asking them to take a two inch single in the next edition for ten bob.

I took the ads in one day to Hatfield - Palatinate was in the hands of a Hatfield clique at the time - and they were moaning they had a hole in the pages. I heard myself saying "I'll fill your hole".

I went back to my room in Castle and wrote a joke piece about a Boat Club Hearty, which Castle was full of at the time. It was a first person piece, as if written by him, on what he'd done that day - getting up, being sick, going on the river, being sick, getting drunk, being sick - all written with rubbish spelling. In the next issue, I did a Theology student. We had loads of them in the 50's. Then I did a science student, a don, and so on. I called the series "A Life in a Day of" - being witty, I thought. Twenty years later, as editor of the Sunday Times magazine, I began a column and gave it the same title. Still going, though it's real, not made up. Until that day, when I discovered journalism, I presumed I would be a teacher. From then on, I thought of nothing else except being some sort of writer.

I had arranged lunch with the present editors of Palatinate. Four turned up (Dan, Jo, Alice, Chris), bringing with them a copy of the paper. I was very impressed. It had 32 pages, lots of ads, and looked ever so smart compared with the weedy Palatinates I used to edit.

I went round the table and asked all four if they wanted to be journalists. All four said yes, probably, and their fantasy was to work on The Guardian. On close examination, none really seemed to know how to go about it. Later I met a girl from Hatfield, Victoria, working on durham21, a website, whatever that is, who was totally clued up, knew all about postgraduate journalism courses and had already worked on her local paper in the hols, which is what I did.

Of the four Palatinate editors, three were from the South, one from the Midlands. The girl from the Midlands said that in the vacation, when she came back from Durham, all her friends said she'd acquired a southern accent. I had already noticed, walking around, how most of the students, especially the girls, seemed to have southern accents. And most were stunning looking, as if they could be William or Harry's girlfriends. Out of the four, only one had in fact gone to a private boarding school, the other three had been at state schools, but I suspect they were all middle class. This Southern, middle class bias is the biggest single change in Durham in 50 years - based on deep research lasting an hour talking with four students.

None was at Castle, so I asked if it was still the best college. Deep groans. The image of a Castleman - and woman - was someone snooty and superior, but they all agreed it had the best facilities - best setting, best JCR, best bar, best library. Probably the best food.

And the cleverest? I mean which college proportionally gets the best degrees? The answer surprised me, partly because I'd never heard of it. "Trevs," they all said. I vowed, before getting off the train that day, not to go around saying "In my day" but of course I was doing it all the time. Trevs or Trev's turned out to be Trevelyan College which didn't exist, etc.

That evening, before the Formal Dinner, I gave a little talk, then we had drinks in the Senior Common Room, which I'd never been in before. Gosh, it aint ‘alf posh and impressive - and full.

I stayed the night in Castle in the Bishop's Suite which has two rooms and a bathroom, each about the size of the Albert Hall, draped with tapestries, stuffed with antique furniture. Anyone visiting Durham can stay there at a cost of £180 per night, which includes a cooked breakfast brought up by two maids. After the meal, I went to the Undercroft bar with the Master, met some Castle students and also picked up some modern day Durham slang. Stash means college branded clothes, not drugs. Toffs add "age" onto words, such as if you feel hungry you talk about getting some "foodage". If you are going to the nightclub Klute you are doing some Kluteage.

Everyone I spoke to, even the ones moaning about Durham being an Ivory Tower, just as we did, said they loved it. Just as we did. The facilities are better and of course having mixed colleges must be a dream (our dream - we could only imagine having a girl in your room later than tea time). Today, while Durham students are posher and more middle class, they are trying hard to keep up the proportion from state schools. At Castle it is 38% private school and 62% state, which is about the same for the University as a whole.

Arriving at Durham at 18 in 1954, I felt I was starting at square one at last, equal with everyone else. Today, if I were to arrive at 18, the person I was then, from my school and background, I fear I might well feel intimidated, socially and intellectually. They all seem so much more mature, cleverer and more sophisticated than I ever was at 18.

On the other hand, there are now three student newspapers, plus their excellent award-winning website, and a campus radio. Lucky them. More things to have a go at than we had. I think that's the best thing about university, you're able to try different things, without the worries and responsibilities you'll have in the real world. My time on Palatinate was definitely the best fun I ever had in journalism. So for that, and everything else, thank you Durham. Hunter Davies was at University College from 1954-1958 where he obtained a BA in Economic History and a DipEd. During this time he was Senior Man and Editor of Palatinate.

Hunter's current project, the ghost-writing of John Prescott's autobiography, is due to be published in June.

His memoirs, The Beatles, Football and Me, are out now in paperback from Headline Review, at a price of £7.99.