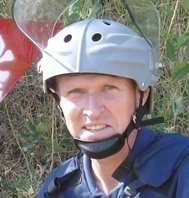 It really didn't look much like a bomb. In fact, the rusty, malformed object protruding from the Afghan dust looked like just one more piece of scrap metal in a country littered with scrap metal. I asked the local mujahedeen commander when the bomb, if that is what it was, was dropped. He thought for a second, while stroking his long, dark beard, "Eighteen years ago" he said, "last October".

This was Chagcharan, the capital of Ghor Province, in Afghanistan. While the commander's men evacuated the townspeople from their mud-brick houses, I absorbed the fact that the only hospital and the only secondary school in the entire province were within 200m of the so-called bomb. When the town was finally empty of people and the mujahadeen had secured the perimeter, I began to gingerly excavate around the rusty lump of metal.

The soil was surprisingly soft, not at all like the sun-baked concrete I had imagined. It took less than 5 minutes to establish that this really was a bomb. In another 10, I could tell you that it was a 500kg monster. Within the hour, I had exposed the tail fuse and knew that this was going to be complicated. It took me another 6 hours to finally remove the fuse and make the bomb safe. 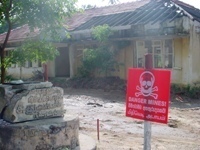 It was December 2001. I was 3,500 miles away from Durham and my congregation was going on without me. As much as I regretted not being part of the proceedings, I didn't regret coming to Afghanistan. That night, as I shared a bottle of illicit whisky in the mess tent, I toasted my classmates and all the other post-grads celebrating in old Durham town.

As you may have gathered, my job is somewhat unconventional. I work for nonprofits, and defuse bombs, landmines, grenades, rockets and whatever other unexploded ordnance litters the war zones of the world. Countries I've worked in include: Rwanda, Mozambique, Kosovo, Afghanistan, Sri Lanka, Colombia, Angola, Sudan, Jordan, Cambodia and Iraq.

Once a war disappears from the TV screen, the killing doesn't stop. Countless people will be killed or maimed by the mines and unexploded ordnance left over from the fighting. Rebuilding and development are constantly impeded by the insidious presence of these devices. The worst thing is their indiscriminate nature. A mine cannot distinguish between a child playing with it or an enemy soldier standing on it. The post-war war can only begin when the fighting stops.

People always want to know how I ended up doing this. As we live in an age of minimal personal responsibility, I blame the BBC. If it hadn't shown the series "Danger UXB" during my formative years, I could probably have got through life without ever wondering how those German bomb fuses really worked. I joined the army with the firm intention of becoming a bomb disposal officer but got sidetracked at Sandhurst and went into intelligence instead. 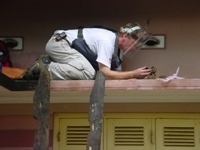 In 1994, the army sent me into the bloody aftermath of the Rwandan genocide, where I had what was probably the least enviable job of the decade. I was appointed "Mass Graves Officer," a disturbing role that is both self-explanatory and horrifying in equal measure.

Luckily the bomb disposal team had the office next to mine. When the prospect of viewing another few thousand mutilated corpses was too daunting, the team took me out to blow things up. I discovered that this is a great way to relieve stress and therefore perfect for Rwanda.

I left the army and after a brief - and miserable - stint working on Wall Street, I found myself living in my 2-man tent beside a minefield in a remote corner of Mozambique. After going through an intense training course to learn how to clear landmines and a wide variety of ammunition, I moved to Kosovo.

Driving around Kosovo for a year, mapping minefields and blowing up unexploded cluster bombs was probably less dangerous than it sounds and definitely much more fun. Kosovo is also the place where I completed an advanced bomb disposal course.

It is a tremendously satisfying job. To clear a minefield and then see the population planting crops on the land is nothing short of wonderful. It's the same when people are able to rebuild their houses or aid agencies can deliver food along a road I have cleared of mines. The sense of achievement is so real that I can almost touch it.

I must confess that helping people is only part of the story; there is also a selfish side to it. The discovery of a particularly large bomb or exotic device is always accompanied by a frisson of excitement. 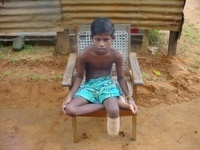 There's also a hint of fear when I have to do the long, lonely walk to deal with a device but there is also a sense of supreme serenity. It's not the thought of dying that worries me; but rather that of being blinded or maimed by the smaller explosive devices.

My last assignment was in Iraq, although I should qualify that by saying that it was in the relatively safe Kurdish part. When my wife's work colleagues asked if she was worried about me being in Iraq, she said that she wasn't. She explained that when her husband works with explosive devices, his location in the world is somewhat irrelevant.

I would like to continue working in mine action but I have also written a book about my experiences. With a bit of luck, it will get published - someday. I'd like to write more books and perhaps explore the possibility of doing a PhD.

Sean Moorhouse gained an MA in International Studies in 2001. He was a member of Hatfield College.