So what exactly lies between Gwyneth Herbert and her wardrobe?

Durham alumna Gwyneth Herbert has been described as a gifted vocalist and one of Britain's brightest young talents. Amidst her busy tour, the talented singer found time to talk to Rebecca Grundy about her music, experiences and inspirations.

Tell us a bit about your musical background
I was in my first band when I was 14 years old and then during my time at Sixth Form College I played in a Jazz Trio. Whilst at university in Durham I belonged to the Jazz and Groove society, provided entertainment for Candlemas and the college ball and took part in plays such as Henry V and As You Like it.

I met Will Rutter who was on my English course and we spent a lot of time walking the streets of Newcastle, Jesmond and Durham together, hustling for gigs when we really should have been studying. We were kept really busy performing in bars, restaurants, and hotels for various functions. We also had a residency at Castle bar every Sunday night. During summer holidays we went to Paris, Amsterdam and Barcelona, wandering around the pavement cafés busking and gig-hustling.

How did you decide tomake a career out of your singing?

Being at Durham was really important for me and helped shape my career and musical interests. I realised that there is a good living to be made from making music if you’re prepared to seek the music rather than let it find you. Durham is such a beautiful place to be and play and the experiences I gained there gave me a good grounding for coming to London.

Once in London, everything exploded quite rapidly. We started doing residencies and making a living then signed a deal with the label Dean Street Records. I wasn’t really expecting the album to do very much but Radio 2 started playing it and then Parkinson featured it on his show and Universal Records became interested and signed me within a year. I made one record with them called Bittersweet and Blue which was a mixture of standard pieces and original songs I’d written with Will.

What came next?
I did a lot of touring which was really good experience and I developed a good press profile. I went to New York and Europe but things changed as my record label wanted a big band, chocolate box album and that was so far away from my own style and ambitions. I had had some fantastic experiences but at times I felt that I was the guest vocalist on somebody else's album. I had stylists and did photo shoots for magazines but it really wasn't my scene. I didn't want to be just a voice piece. So I ended up walking out of my 5 album deal and went on to make an album of my own music and style. I really enjoyed doing my own thing and the band really supported me in my decision which was an incredible boost. Blue Note records heard my album through my manager and called immediately to sign it as their first UK release in 30 years. At last I was doing what I wanted and the guys at Blue Note took a very hands-off approach. They put their trust in my creativity which is a refreshing change.

Which artists have influenced your music?
I listen to all sorts of music; it all shapes what I write. I like Billie Holliday, Nina Simone, and singers from the 60's and 70's such as Joni Mitchell and Carol King. The music of Regina Spektor and Rufus Wainwright also move me and I love the drama and intensity of Russian composers such as Schostakovich.

What do you get your inspiration from?
It can be anything: a newspaper headline, an overheard snapshot of a conversation or just something from my own imagination.

Is there anybody you would like to work with in the future?
Janis Ian - she has had a huge influence on me, both as a singer and a writer, especially when I was deciding whether or not to part with my previous record label. She was manipulated by record companies but then took control of her career - she is a very strong woman. I hope to go to Nashville later this year to write with her. My absolute dream would be to have David Bowie to produce my next record. And I'd love to work with the Radiohead boys. Their latest record is textually and musically brilliant. 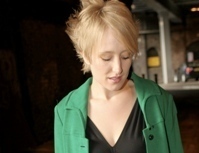 What are themost rewarding parts of what you do?
All of the aspects of what I do are pretty amazing. The most exciting thing is coming up with a song, having the idea in my head and then watching the band bring it to life. My band has a huge influence on what I do. They take a song from my head and make it bigger in a way that I didn't even imagine possible. The live performances are possibly the most rewarding -nothing beats the buzz of performing in front of an audience and getting its feedback afterwards.

Are there any negative aspects?
No, not really. I love working, travelling, writing and now I've got a good relationship with my record label things couldn't be better!

Gwyneth Herbert attended St Chad's College from 1999-2002 where she obtained a BA Hons in English Literature.

Between Me And The Wardrobe was released in September 2007 and is on sale throughout the UK.

Gwyneth will be performing at the Gala Theatre in Durham on 2nd May 2008.