More than a Buddy 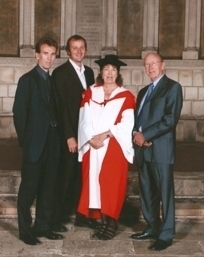 Durham alumna (BSc Zoology, St. Aidan's, 1961-64), former Tomorrow's World presenter, Honorary Graduate, freelance broadcaster and writer, Judith Hann, was one of the many Durham students to find love at Durham. Here she talks to us about when she met then future husband, John.

"It was at a party thrown by the Senior Man at Lumley Castle - where all Castlemen spent a year of their student lives at the time - that I met John (BA Politics and Economics, Castle 1960-63). I was in my first year at St. Aidan's and had gone to the party with a male friend. I was already pretty sure this would be my first and last date with him and when I met John, this was confirmed! John was in his second year, was secretary of the JCR and, I discovered, fancied himself as being rather cool. When I challenged one of his more outrageous claims, like "I live for kicks," instead of being annoyed he was intrigued by me and we had a stimulating exchange of views - as we still do.

We didn't meet again for months, he was busy with student politics and sport and I was working hard on my social life and my academic commitments. Again, it was at a big social event - Castle Day. He didn't stay long as he was playing cricket for the University but two days later he phoned to ask me out. (He only found the courage after being told by a mutual friend that I found him very interesting.) We had a drink in the Three Tuns and then went to see a film at the Appleby Theatre. I thought that he dressed well, what he didn't tell me for some time afterwards was that thecream double breasted mac and several other items that he'd worn had been borrowed to create a good impression!

From our first date, we saw each other most days and after only a fortnight of being a couple, went home for the weekend to meet his family in Nottingham and mine, conveniently in Derby. On the way back he proposed to me on York station. Looking up I saw we were next to a Moss Bros billboard showing a bride in a long white wedding dress standing proudly next to a groom in tails. I looked up and glibly said "That would not be my style."

Undeterred, he carried on proposing at places ranging from the Racecourse, to the walk back from the bus stop at Shincliffe, to the valley behind Lumley. And after a dozen or so proposals John said: "I'm fed up with proposing to you. That is the last time I will ever ask you."

As our homes were so close, we saw each other regularly during the long summer vacation. Even my older brother spotted the signs, saying cynically: "I know we've got to take him seriously because we've had tinned salmon for tea and it's not even Sunday." In Durham, too, we were inseparable at dances, parties (I'd turned a social recluse into a party animal), working on Palatinate and at Union Society debates (he'd turned a party goer into a political animal).

Then in the second term of John's final year we were dancing in the Undercroft Bar in the Castle. The early rock and roll star, Buddy Holly, was singing True Love Ways and in a spirit of romance, I proposed to him! John was astonished, but quickly accepted.

We were married in October 1964 just after I graduated from Durham and we stayed in the North East working as journalists until we moved to London in 1971. We now live in Gloucestershire but whenever we hear the opening notes of True Love Ways we are back in the Undercroft in 1963."

Judith and John have two sons (pictured) and have just celebrated 45 years of marriage. Judith was awarded the honorary degree, Doctor of Civil Law at Durham in January 2009.