In this study we explored the risks to infants of sharing their parents' bed using a combination of video and physiological monitoring. It has been suggested that temperature regulation, lethal CO2 rebreathing, suffocation, or parental overlaying might play a role in causing the death of an infant who dies in its parents' bed. The present study aimed to provide information to address these questions. Events considered here, that may occur during bedsharing, and which parents and health professionals generally consider to be 'risky' for infants involve:

a. compression of infant by parent (overlaying/suffocation)
b. covering of external airways by bedding (suffocation/rebreathing),
c. enclosure of infant's head with bedding (overheating).

Participants were 21 families with breastfed infants under 3 months of age, recruited from N. Tees region through health visitors, baby clinics and local publicity. Parents brought their infants to the sleep lab for 3 consecutive nights -- an adjustment night and two test nights when parents and infants were monitored sleeping with their infant in-the-bed, and the by-the-bed. Babies were monitored physiologically throughout the night, and parents and infants were monitored behaviourally via infra-red video. The behaviour of the families during the sleep lab test nights was consistent with the pattern of behaviour reported on home-based sleep logs, and with bedsharing behaviour observed during previous studies of both in-home and lab-based bedsharing.

Potential compression events were equally rare on both bed-sharing nights and cot-sleeping nights. In only two cases did the full weight of a parents' arm rest upon the infant. In both cases this was for a brief period (less than 15 seconds), and in both cases infant movement triggered the parent removing their arm. On bed nights parents sleep positions minimised their chances of compressing their infant. Infants' external airways were covered by bedding for a significantly greater proportion of the night on bed-sharing nights than the cot nights - however -- we found that in these normal healthy infants, oxygen saturation was unaffected by the covering of external airways by bedding for the periods observed. Most cases of external airway covering were terminated by parents altering the position of the covers. It would seem likely that the frequent movement of bed-partners and bedclothes on bed nights could ameliorate the effects of rebreathing. On cot nights infants remained with external airways covered for longer periods than on bed nights.

Infants were observed sleeping with their heads completely covered by bedding on 10 bed nights and 2 cot nights. Bouts of head covering ranged in duration from 6 minutes to all night. Babies were found to have a greater duration of whole head covering on bed-sharing nights compared with cot nights, however there was no significant difference between rectal temperature during bouts (matched for sleep state) when head was covered or uncovered.

Associations have been previously identified between SIDS and high rectal temperature, sweating and overheating, and given the emphasis placed on thermal stress during sleep in SIDS reduction measures, it is not surprising, that the potential for overheating has become a cause for concern in the context of parent-infant bed-sharing. In this study babies' average temp was significantly higher on the bed night than the cot night by a mean of 0.1oC. We also found that infants spent a significantly greater proportion of the bed night in REM sleep than the cot night - and that infants' rectal temperatures were significantly higher in REM sleep than in quiet sleep (on both bed and cot nights). This would suggest that the reason the average temperature of a baby during a bedsharing night is greater than that of a baby during a cot night is because a longer period of time is spent in REM sleep, not because a baby's temperature during a bedsharing night is absolutely hotter than during a cot night.

We conclude that for normal healthy infants bedsharing may be associated with slight increase in average temperature associated with a greater proportion of REM sleep, more frequent covering (and uncovering) of head and external airways, and the rare possibility of compression by a parental limb - when compared to cot-sleeping by-the-bed - but none of these events appear to have adverse consequences for the infants concerned. 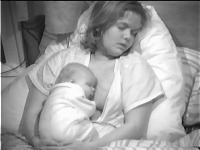