This study explored the sleep and night time care behaviours of adult and adolescent mothers in South Bend, Indiana, US. The observational study took place at the Mother-Baby Sleep Lab at the University of Notre Dame, with permission of Professor James McKenna. The data analyses and final report was written for Dr Lane Volpe's PhD in Anthropology at Durham University where she was supervised by Professor Helen Ball and Professor Robert Barton.

Publications arising from this project:

A sub-sample of adolescent and adult mothers was drawn from a larger, prospective longitudinal study on transition to parenting in Indiana, U.S.A. Overnight, infra-red video recordings of the nighttime parenting behaviours of mother-infant dyads were collected for 23 adolescent and 22 adult mothers when infants were approximately 4 months of age. The video recordings were reviewed in real time in their entirety and coded using a behavioural taxonomy designed for this study which was entered into the Noldus Observer software. Data were analysed for group differences and were assessed against the predictions derived from the two models to determine which theoretical framework better fit the behavioural outcomes. Additionally, qualitative descriptions of focal behaviours related to infant risk were produced.

Teen mothers exhibited closer physical proximity while infants were awake and asleep, mother-infant bedsharing, and a higher number of sleep environments for infants. There was more compatibility between maternal and infant sleep periods in the teen group, with mothers going to sleep sooner after their infants did compared to adults. There was also a trend toward teen mothers having more frequent but shorter awakenings during the night. Adults spent more time at greater distances from their infants, and more often placed infants to sleep in a cot in a separate bedroom. Both groups were prompt to respond to infant crying, although there was a trend towards shorter crying bouts among infants of teen mothers. Fewer teen mothers breastfed their infants, and infant self-feeding from bottles propped on blankets or other materials was more frequent among teen mothers. There was a trend towards more frequent placement of infants in the prone sleeping position among the teen mothers, although intervention by research staff in such instances obscured the outcomes. More teen mothers placed their infants' heads on pillows compared to adult mothers, but for the major categories of risk that were coded (breathing risks, feeding risks, and other types of potential risk) there were no group differences between teens and adult.

The findings of this study revealed significant differences between teen and adult mothers in how they managed the costs of caring for infants at night. The predictions generated by the life-history model were a better fit for the behavioural outcomes overall. Life-history theory predicted that teens would engage in cost-reducing measures in order to meet their own growth and development needs as well as those of their infants while adult mothers could afford to exhibit greater parental investment relative to self-investment. Teen cost-cutting measures were evident, and were accomplished by pursuing a behavioural strategy that minimised parent-infant conflict and brought maternal and infant needs in line with each other during the night. The teen strategy achieved a reduction in maternal costs through increased involvement with and proximity to infants, rather than through the withdrawal and distancing that would be predicted by existing literature on the sub-optimal parenting styles of adolescents. The conventional model suggested that the sub-optimal parenting style of adolescents would lead to greater sleep-related risk exposure. However, the data revealed that risks occurred for both groups, although they involved different sleep environments.

The findings of this study also contradict the assumption that any sleep environment is inherently safe or inherently risky, and suggests ways in which an evolutionary perspective might be applied to modifying public health policy related to infant sleep. The findings reinforce the idea that parental behaviour affects the risks to which infants are exposed and that nighttime parenting behaviours are shaped by maternal reproductive and parental investment strategies. This study therefore supports the idea that one-size-fits-all approaches to health and behaviour are inappropriate, and that public health recommendations related to infant sleep should be sufficiently elastic and/or tailored to allow for the range of contexts within which infant care occurs. Because mothers arrive at parenting from very different life trajectories, and because each of these trajectories causes them to evaluate and tolerate parenting costs and risks to infants in variable ways, it is incongruous to expect that they should all be encouraged to parent in a similar manner or to structure their infants‘ nighttime routines in a uniform way. 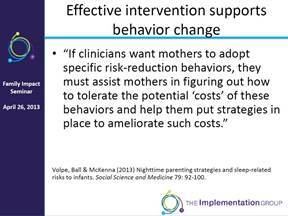