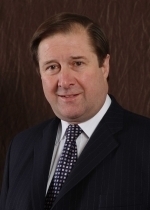 Advisory Board Member of the Centre for Criminal Law & Justice

Bill Hughes was appointed Director General of the Serious Organised Crime Agency in August 2004. The agency commenced operations in April 2006 as the first UK-wide national and international law enforcement agency.

Prior to this he was the Head of the National Crime Squad, operating across England and Wales, during which time he led the organisation in tackling serious and organised crime.

His career in the police service started in 1975 with Thames Valley Police.  He served in various uniform, CID and specialist posts, before transferring to become Assistant Chief Constable (Operations) in West Yorkshire Police from 1991 to 1997.  Bill then served as Deputy Chief Constable in Hertfordshire from 1997 to 2000 before heading up the National Crime Squad as the Chief Constable/Director General.

He has led the ACPO Crime Committee, and the Joint Working Group in the Police Service on Health and Safety. He has also served on the ACPO Public Order and IT committees.

He was the UK Head of Delegation at the European Police Chiefs Task Force between 2000 and 2010, and between 2001 and 2006 he chaired the G8 Lyon Roma Police and Terrorism Group on Policing.

In 2006, Bill joined the Employers' Forum on Disability President's Group.

In 2010 Bill was invited to become a member of the Centre for Criminal Law and Criminal Justice at Durham Law School.

Prior to joining the police, Bill worked as a car crash safety engineer and graduated from the University of Aston in Birmingham with a B.Sc (Hons) in Mechanical Engineering in 1973.

Bill retired in August 2010 after 35 years in police and law enforcement.