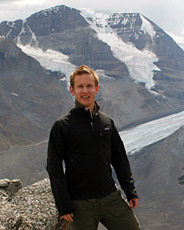 I research how erosion and weathering processes at Earth’s surface act to transfer carbon dioxide between the atmosphere and long-term, geological storage in sedimentary deposits. I seek to better understand the feedbacks between these carbon transfers and the climate system, and thus how Earth surface processes may damp (or amplify) climate change through the carbon cycle.

To do this, I quantify carbon transfers in field locations around the world. These include tectonically active settings (Taiwan; New Zealand; Sichuan, China; Peruvian Andes), high mountains (European Alps) and high latitudes (Mackenzie River Basin, Canada). I combine direct sampling of rivers, soils, biomass, marine sediments and geochemical analysis, along with field and remote–sensing based observation and hydrometric monitoring. In particular, I measure stable (12C, 13C, 14N and 15N) and radioactive isotopes (14C) of organic matter to understand the source and processing of organic matter in river systems. In addition, I seek to develop and apply redox-sensitive trace elements and their isotopes (e.g. rhenium) in river catchments to quantify oxidative weathering processes. These techniques are applied with an aim to better understand how Earth surface processes impact the global carbon cycle.

In 2008 I moved to Paris, where I worked as a Post-doctoral Research Associate at L'Institut de Physique du Globe (IPG) in the Laboratoire de Géochimie et Cosmochimie.

Since October 2009, I've been at Durham University, where I was promoted to Reader in October 2015, with a return to IPG in Paris (2012) as Professeur Invité.

I serve as Associate Editor at Earth Surface Dynamics (from 2013), Chemical Geology (from 2015) and PLOS ONE (from 2017) and am a regular reviewer for a wide range of international journals. In 2014, I was presented with the Outstanding Young Scientist Award of the European Geosciences Union (EGU) in recognition of my ‘innovative contributions to the identification of the role of mountain belts in the global organic carbon cycle’. Collaborations with Chinese colleagues were recognised by an award in 2017 from the Chinese Academy of Sciences. In 2018 I was selected as a Finalist in Chemistry - Blavatnik Awards for Young Scientists in the United Kingdom.

Oxidation of organic carbon in sedimentary rocks is one of the major, natural carbon dioxide emissions to the atmosphere. Despite this recognition, this flux is very poorly constrained by measurements and the controls on this major CO2 emission are not well known.

This topic forms my major research direction over the next 5 years under the ERC Starting Grant ROC-CO2 (http://roc-co2.weebly.com/). Previous NERC-funded (New Investigator Grant) research helped further develop and apply novel tracers of oxidative weathering (rhenium). Using this tracer in Taiwan revealed the importance of physical erosion on setting the rate of CO2 emission by this process. This work has provided the first quantification of the organic carbon budget of a mountain belt, showing erosion and weathering in Taiwan result in a net accumulation of organic carbon at present.

ERC-funded research (including NERC-funded research by Kate Horan 2014-) is seeking to quantify this process in other mountain belts and other river catchments, while assessing how glacial erosion processes may enhance this oxidative weathering flux.

2. Carbon export from the terrestrial biosphere by erosion

Erosion of the terrestrial biosphere can result in the export of carbon by rivers. The transfer of this particulate organic carbon represents a potential loss of net primary productivity if oxidised following erosion. However, if exported by rivers it may instead contribute to long-term storage of carbon away from the atmosphere, and ultimately contribute to geological carbon dioxide drawdown. Mountain belts are thought to be very important in this transfer because they experience high erosion rates and carbon is exported along with mineral sediment which may help to bury organic matter.

My research has sought to quantify the erosional fluxes of carbon from mountain forests around the world, and assess what controls these transfers. Research in Taiwan, New Zealand and the Andes has shown how important it is to correct for the input rock-derived organic carbon from sedimentary rocks (‘fossil’ or ‘petrogenic’). I have used stable isotopes, element ratios and radiocarbon (via NERC-funded research) to track and quantify organic carbon source and provide constraint on carbon export from the biosphere at the highest rates of erosion on Earth. I have also sought to understand how erosion impacts forest turnover (via landsliding) and nutrient status (e.g. nitrogen export).

Recent work has tracked the fate of organic carbon eroded from mountains in large river systems (e.g. the Amazon) and in offshore depositional environments (offshore Taiwan) to better understand how erosion impacts the carbon cycle.

High magnitude geomorphic events may play an important role in governing the impact of erosion on global biogeochemical transfers. This is because they are capable of eroding large amounts of organic matter at the same time as large volumes of clastic sediment, potentially exporting materials quickly through river systems. In addition, they represent potential links between climatic variability (e.g. extreme flood events) and tectonics (e.g. earthquakes) and carbon export fluxes from mountain belts. However, it has proved to be extremely difficult to measure riverine fluxes associated with extreme geomorphic events.

My NERC-funded research in Taiwan has assessed the role of large floods triggered by tropical cyclones (typhoons) on organic carbon export by mountain rivers. It proposed a link between tropical cyclone frequency and carbon export and burial. Recent work with PhD student (Kathryn Clark 2010-2014) has identified the important role of flood events in carbon export from the Andes.

We are currently investigating the impact of the 2008 Wenchuan earthquake on sediment and biogeochemical cycles. The earthquake triggered >50,000 landslides in the Longmen Shan. Royal-Society and National Science Foundation-China –funded research is currently assessing how the event impacted both dissolved chemical weathering-derived fluxes and erosion and export of organic carbon from the biosphere.

Soils at the northern high latitudes contain approximately double the carbon content of the pre-industrial atmosphere. This vast carbon reservoir is located in a region very sensitive to climatic change on geological timescales, and to change over the coming century. Ongoing NERC and CNS funded research in the Mackenzie River Basin, the largest source of particulate organic carbon to the Arctic Ocean, seeks to better understand how erosion of these soils may modify this carbon stock and lead to a longer-term stabilisation (through sedimentary burial) and/or release carbon by exposing aged-organic matter to degradation processes.