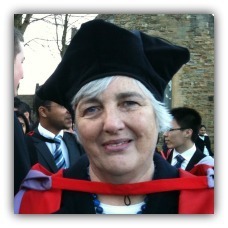 I have taught the MA Literature and Religion module in the Department of Theology in Durham since 1999 and have interests in nineteenth and twentieth and twentyfirst century English Literature, from Romanticism to Post-Modernism, writing and thinking with particular interest in theological modernism from around 1880 - 1940 and writing primarily on woman novelists and poets, principally Mrs Humphry Ward (1851 - 1920) and Stevie Smith (1902 - 1971) though with a separate interest in the poetry of Elizabeth Jennings (1926 - 2001).

I am a Fellow of St John's College, Durham and am currently also working part-time in St Chad's College during the academic year 2015/16 on pastoral and welfare issues.

From 1996 until 2007 I was a member of the Board of Studies of the Department of English in Durham University and taught the Victorian Period and American Literature but principally the Novel in tutorial teaching in minority time set against majority time working as Vice-Principal of St Mary's College until 2014.

Originally my doctoral work focussed on the writing, particularly the previously unpublished 1860s MSS juvenilia, of Mary Arnold (niece of Matthew Arnold) later Mrs Humphry Ward, eminent Edwardian novelist and friend of Henry James, and the relationship the juvenilia bear to her twenty five published novels. These interests continue to generate conference papers and publications. Mrs Humphry Ward's historically most significant three volume novel Robert Elsmere (1888) explores the theme of an evangelical clergyman whose reading of Biblical Criticism leads him to abandon the Church of England and form an idealistic socialist theism, which Mrs Humphry Ward herself espoused. This engaged agnosticism is also evident in the writing of Stevie Smith, on whom a chapter and a conference paper are in preparation for 2015/16.

In the past I regularly organised Durham University conferences in English Literature and Religion, originally with Moscow State University in a three cornered partnership which lasted until 2009. My next conference in Durham will involve organising literary contributions to the 'Exploring the Glory of God' conference to be held from 6 - 9 July 2016 in Durham.