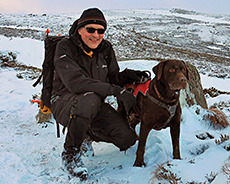 I have a long association with the Department, BSc 1976, PhD 1991, Chair of the Board of Studies 1997-2000. My main areas of research focus on sea-level and environmental changes and I set up the Sea Level Research Unit in 1987, attracting more than 30 research grants and contracts worth more than £2 million.

Land uplift and subsidence In Britain and Ireland

This work started in the 1980s, with first paper, published 1987, quantifying the regional-scale pattern of uplift and subsidence around the North Sea. This was followed, in 1989, Journal of Quaternary Science, by the first analysis for 35 years to provide a quantitative estimate of current land uplift and subsidence in mainland Great Britain to be supported by the geological and oceanographic data. Significant advances in data quality and spatial cover followed over the next 10 years, with a revised analysis (Shennan & Horton, 2002) that included tidal range changes and anthropogenic-induced subsidence. Further consideration of sediment compaction and integration of field data with geophysical models led to the most recent updates, Shennan et al 2006 and 2009. These provide our most reliable measures of the long term rate of relative land/sea-level change in Britain and Ireland, prior to any 20th century increase in sea level. To use this map alongside any predictions of future global sea level rise you must add the prediction (for example, from the latest IPCC report) to the value for a chosen location. If your location includes areas of soft sediments, such as coastal lowlands or reclaimed esturine sites, you must also add the effect of sediment compaction to get the total amount of land subsidence.

Photograph 1: Loch nan Corr, Kintail, Scotland. Taking sediment cores from what is now the freshwater loch to measure land uplift. It was previously a marine embayment, but gradual land uplift has raised it above the level of even the highest tides.

Photograph 2: Ancient forest and peat layers at Druridge Bay - shows how relative sea-level has risen in comparison to the land, even where the land is still rising, its just that sea level has risen even faster as the ice sheets melted.

This involves application of a wide range of methods of palaeo-environmental reconstruction (field, laboratory, experimental and analytical techniques) and development of a new research methodology.

The 16000 year record of relative sea-level change (RSL) in NW Scotland allows calculation of quantitative limits of global meltwater discharge in terms of both timing and magnitude (see recent publications). Various claims in the literature about periods of rapid ice decay and subsequent climate changes can be readily tested by such RSL records. In order to remove any effects of local ice sheet chronology my current research in this area focuses upon establishing a better spatial coverage, to create similarly comprehensive records for 3 areas in Scotland. This will be a powerful discriminator between the different model solutions and hence the timing and source of meltwater discharge.

Earthquake and Tsunami Hazards in Alaska, Washington and, Oregon

This applied aspect of sea-level research utilises theory and methods of analysis developed at Durham to the identification and analysis of great earthquakes in plate-boundary locations, with recent projects focussed upon Washington, Oregon and Alaska. 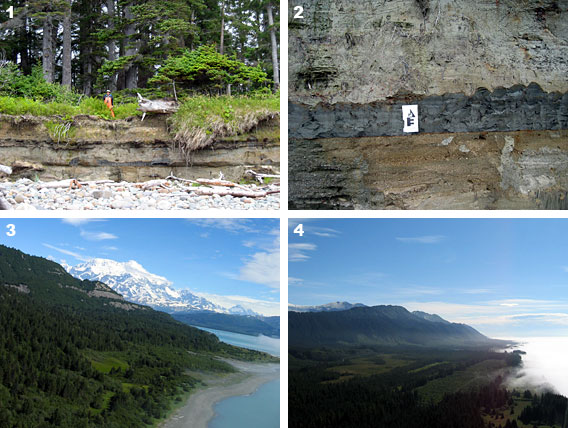 Photograph 1: Sediment section exposed at the top of the present storm beach of ‘The Forgotten Coast’ of Alaska, east of Cape Yakataga. The boulders are those found at the upper limit of the modern beach. Immediately behind the boulders the sea has eroded into sediments, forming a small cliff, and exposing different sediment layers of peat, mud and sand. Ron Bruhn, University of Utah, stands on the top of the section.

Photograph 2: Close up of the sediment section in photograph 1. This part of the section is the horizontal boundary between two layers of sediment, about 1m above the boulders in photograph 1. The scale arrow is 10cm total, the lower part of the arrow shows 1cm increments. The wavy line in the top part of the image is simply where we have cleaned the sediment surface to expose the uncontaminated sediment, free from soil that has fallen down the cliff. The sharp, horizontal boundary, represent a change from beach sand (light brown, coarse texture) to grey mud. Fossils in the mud and radiocarbon dating show it to be sediment laid down in a lagoon or shallow lake approximately 1500 years ago. So, the scientific interpretation is that an earthquake caused uplift of at least 2m, instantaneously raising a beach environment to above high tide level, allowing a freshwater lagoon or shallow lake to develop.

Photograph 3: A view of Mt. St Elias and Icy Bay. The area encompasses part of the Wrangell - Saint Elias National Park and Mt. Saint Elias rises from tidewater to an elevation in excess of 5400m and the region is marked by North America's greatest alpine and piedmont glaciers. This spectacular region is an enigma in the study of plate tectonics and great earthquakes because of structural complexity in the transition from strike-slip to subduction plate boundaries, and its remoteness.