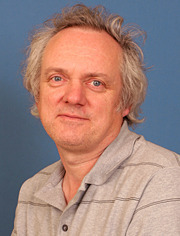 My expertise and principal area of research experience is in Quaternary science, with emphasis on fluvial sequences. My early work was on the River Thames, which has a Quaternary sequence of international importance, and its tributary, the Medway (the river that divides those males born in the county of Kent into Kentish Men and Men of Kent: I number myself amongst the latter). This grounding provided a platform for a number of initiatives aimed at broadening my research into an international sphere, once I became established in Durham. My Earth-science interests have always overlapped with the oldest divisions of the archaeological record, perhaps because the Lower and Middle Palaeolithic archives from the Thames system are so extensive; my research in this area led to the award of the Henry Stopes Memorial Medal of the Geologists' Association in 2003, for 'on the Prehistory of Man and his geological environment'.

In 1996 I co-founded a new research group within the Quaternary Research Association (QRA) called 'FLAG' (FLuvial Archives Group). This had its first meeting in Durham in December of that year, its aims: to facilitate liaison between those working of fluvial records. FLAG is now a fully international body that has organized a sequence of six successful biennial meetings in the past decade (Mainz 2000, Clermont Ferrand 2002, Siena 2004, Izmir 2006, Budapest 2008 and Castelo Branco 2010), following on from the three annual meetings during the funded years (1996–8) as a research working group within the QRA (Durham, Arcen and Cheltenham). Added to these has been participation in sessions at successive INQUA congresses in Reno (2003), Cairns (2007) and, next year, Bern. FLAG has also participated in other meetings, sometimes (as for INQUA sessions) in partnership with GLOCOPH, and has co-hosted a session at the EGU (2005). At the 2010 FLAG meeting in Castelo Branco, Portugal, I was elected as the new Chairman of the group.

In 1997 I obtained a grant of £76,000 from the Leverhulme Trust for work on Middle Pleistocene Mammalian Biostratigraphy of North-west European Rivers. This project, completed in April 2000, employed Danielle Schreve (now a professor at Royal Holloway, University of London) as Senior Research Associate.

From January 2000 to 2007 I was Co-Leader of successive projects within UNESCO's International Geological Correlation Programme (IGCP: now International Geoscience Programme), the first (2000–2004) entitled 'Global correlation of Late Cenozoic fluvial deposits' and the second (2005–2007) 'Fluvial sequences as evidence for landscape and climatic evolution in the Late Cenozoic'. These were fully international projects aimed at amassing data on long-timescale fluvial archives from around the world. Their results can be appreciated from the publications they produced, more of which will appear in the future. Syntheses are provided by special issue editorials in Quaternary Science Reviews (2007, Vol. 26, Parts 22–24 (pp 2693-3016)) and Global & Planetary Change (2009, Vol. 68, issue 4). ). Nested within FLAG, these projects provided a further seven combined conference and field meetings, in Prague and Kanpur (2001), Agadir (2002), Belem (2003), Malaga (2004), Sanliurfa (2005) and Nanjing (2006).

Between 2001 & 2009 I have obtained a series of small awards from the Council for British Research in the Levant (Rivers of the Levant), using which I have developed research on rivers in Syria and adjacent parts of Turkey, including the Orontes, Euphrates, Tigris and Ceyhan. The sequences in these rivers are particularly valuable, as several have yielded Palaeolithic artefact assemblages and some can be dated with some precision from interbedded volcanic rocks (see relevant publications).

From 2003 I have been part of separate teams working on two project clusters with substantial funding from Aggregates Levy Sustainability Fund (via English Heritage). The first, 'Late Quaternary Landscape History of the Swale-Ure Washlands' (with a follow up 'Late Quaternary Environmental & Human History of the Lower Tees Valley') has led to a number of publications, including a book (Oxbow books, 2010). The second, 'The Lower and Middle Palaeolithic Occupation of the Middle and Lower Trent Catchment and Adjacent Areas, as Recorded in the River Gravels used as Aggregate Resources' (with a follow up 'Lower and Middle Palaeolithic of the Fenland Rivers of Cambridgeshire') has also produced several journal articles, with anothyer Oxbow monograph in production.

In 2009 I joined the Council of the Geologists' Association as Senior Vice President, becoming President for a two-year period from May 2010. This has led to enhanced activity in connection with the long-established journal of that learned society, the Proceedings of the Geologists' Association, which has recently moved to Elsevier and Science Direct, including co-editing special issues published in 2009 and 2010 on behalf of FLAG and the QRA. I shall deliver the first of two Presidential Addresses in May 2011, 'Late Cenozoic Fluvial Archives: a potential revolution in our understanding of continental geology'. Also for 2011, I am helping to organize a GA meeting, sponsored by Elsevier, entitled 'Geoconservation for Science and Society: an Agenda for the 21st Century', a reflection of a long-standing interest in Earth science conservation that links back to my involvement in the Geological Conservation Review (1980–1994).