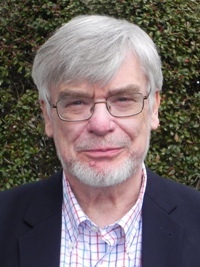 I have been an honorary lecturer in the University of Durham since 1981, Honorary Professorial Fellow in Practical Theology and Christian Education since 1997, and Honorary Professor in the Department of Theology and Religion since 2012. I currently also hold a part-time post at the Bishop Grosseteste University, Lincoln, as Alister Hardy Professor of Religious and Spiritual Experience.

I read Natural Sciences (specializing in the biological sciences) and then Theology at the University of Cambridge, and continued my theological studies at the University of Birmingham while training for ordination at The Queen’s College, Birmingham. I was ordained in the Church of England in 1970 and served as an assistant curate in South Staffordshire before moving to Durham as a College Chaplain and Lecturer in Divinity in St Hild’s College, later the College of St Hild and St Bede. While in Durham I began working part-time for my PhD in the philosophy of religion (on the religious epistemology of Ian T Ramsey; awarded 1979).

From 1977 to 1981 I was Principal Lecturer and Head of Religious Studies at Bishop Grosseteste College, Lincoln and Associate Tutor at Lincoln Theological College, responsible for a joint degree in Theology and Ministry of the University of Nottingham, taught at the two colleges.

I returned to Durham in 1981 as Founding Director of the ecumenical and independent North of England Institute for Christian Education, whose primary task was to create links between Christian theology and education, particularly by promoting research in Christian learning in all its aspects, but especially within congregations. The Institute closed in 2013. For details of NEICE, its work and related publications, see www.durham.ac.uk/neice.

I am the author or editor of around forty books in Christian education, practical theology or religious faith, including academic monographs, such as The Philosophy of Christian Religious Education (1994) and Ordinary Theology: Looking, Listening and Learning in Theology (2002); readers and edited collections, such as Theological Perspectives on Christian Formation (1996), The Idea of a Christian University (2004) and Exploring Ordinary Theology (2013); student texts, such as Choosing Life? Christianity and Moral Problems (2000), Exploring God-Talk: Using Language in Religion (2004) and the SCM Studyguides to Christian Doctrine (2010) and Religious and Spiritual Experience (2020); and works on popular theology and spirituality, such as Beyond the Here and Now (1996) and Christ of the Everyday (2007). My 150 journal articles, chapters in books and research reports cover a similarly wide field. (A full list of publications may be accessed here.)

I have a range of research interests within Christian education and practical theology, including conceptual research in the philosophy and theology of Christian learning and moral and spiritual education, and studies in ‘ordinary theology’. I have also undertaken both qualitative and quantitative empirical studies among churchgoers, teachers and students.

Within the field of Theology and Religion my main academic interests are in the Philosophy of Religion and the Science and Religion debate, and I have taught at undergraduate level in the Department in both areas. I have collaborated with colleagues in the production of a series of six undergraduate readers on key issues in Theology and Religious Studies. I have taught a MA module in ‘Christian Formation, Faith Development and Critical Education’. My current research interests extend to theoretical and empirical studies of religious and spiritual experience.

From time to time I am able to supervise research students within the fields of Christian education and practical theology, or other areas of Theology and Religion and Theology and Ministry. Because of my other commitments, however, this is not always possible. Prospective students should contact me directly at Jeff.Astley@durham.ac.uk.