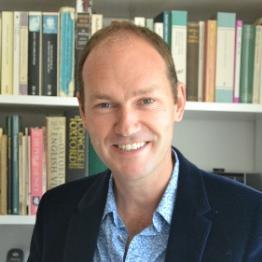 ORCID profile
Professor / Deputy Head of School in the School of Modern Languages and Cultures
Telephone: +44 (0) 191 33 43444
Member in the Institute of Medieval and Early Modern Studies

I am the author of The Je-Ne-Sais-Quoi in Early Modern Europe: Encounters with a Certain Something (2005) and Montaigne and the Art of Free-Thinking (2010; 2017). Both books have been translated into French. Other publications include Thinking with Shakespeare: Comparative and Interdisciplinary Essays (2007), Fiction and the Frontiers of Knowledge in Europe, 1500–1800 (2010), and Caribbean Globalizations, 1492 to the Present Day (2015).

At the heart of my current research are two projects.

The first examines the uses of untranslated French words in English and asks what these words reveal about the fertile but fraught relationship that England and France have long shared and that now entangles English- and French-speaking cultures all over the world. Émigrés: French Words That Turned English is forthcoming from Princeton University Press in August 2020.

The second project brings into dialogue translations and reworkings of Thomas More’s Utopia from across the early modern world. The book arising from the project, The Inventions of Utopia, is a comparative study of the utopian tradition that emerged in the century following publication of Thomas More’s Utopia in Latin in 1516. I show how the style of Utopia established More’s text as a laboratory of ongoing literary invention.

Both of these pieces of individual research are related to the ongoing work of broader collaborative projects in which I am involved. I co-direct an international research group, Early Modern Keywords, whose aim is to compile a new vocabulary of early modern European culture and society in a multilingual and interdisciplinary perspective. I am also an active member of Storming Utopia. The project has so far seen an intergenerational group performing an ‘tempestuous experiment in practical utopianism’ in several ways: making a new piece of theatre that draws on More’s Utopia, Shakespeare’s Tempest, and Montaigne’s essay ‘On Cannibals’; performing the show in Oxford and Venice; and running events enabling members of the public to engage in the questions of research and creative practice that lie at the heart of the project. I previously directed a major collaborative project exploring evolutions of Caribbean cultural identity in the long age of globalization.

Co-director of Early Modern Keywords with Ita Mac Carthy (Durham). This international research project aims to do for early European modernity what Raymond Williams did for British modernity in Keywords (1976). Our work, unlike his, involves taking a multilingual approach and reflecting on questions of method. The project thus offers a unique interdisciplinary interface for language-based research in intellectual, cultural, and social history, the history of art, linguistic and literary studies, and politics. Having published Renaissance Keywords, ed. Ita Mac Carthy (Legenda, 2013), we have held meetings at the University of Oxford (2014) and the Fondazione Cini in Venice (2016 and 2018).

Founder of The Oxford-Venice Initiative, a series of collaborations between the Fondazione Giorgio Cini (Venice) and the University of Oxford’s Humanities Division (2014–18).

I have supervised PhD students working on a range of topics, including French studies, comparative literature, word histories, and intellectual history. I would welcome enquiries from students who wish to pursue PhDs in these fields and all others related to my research interests.

I was appointed Professor of French in January 2019. I moved to Durham to take up the Chair created, along with two Associate Professorships in French, by way of succession to Lucille Cairns and John O’Brien. I had spent the previous thirteen years at Oxford, as Fellow and Tutor in French at Oriel College, and as (first) University Lecturer in French and (latterly) Professor of French and Comparative Literature.

While at Oxford, I served as the University’s Humanities Division Knowledge Exchange and Public Engagement Lead, developing partnerships with non-academic institutions in and beyond the UK. I also served a term as Oriel’s Senior Tutor.

I am a former Editor of Early Modern French Studies, the journal of the UK Society for Early Modern French Studies, on whose Executive Committee I sit. I am a Member of the Jury du Prix XVIIe siècle (on behalf of La Société d’Étude du XVIIe siècle, France) and of the Editorial Board for the French Renaissance Texts in Translation (FRTT) series published by AMS Press (New York). I am a Literary Theory Consultant for the Oxford English Dictionary.

I am the recipient of a Philip Leverhulme Prize and a Chevalier of the Ordre des Palmes Académiques. I have held visiting research positions at national and international universities.