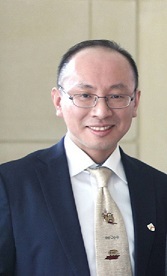 Ge Chen is Assistant Professor in Chinese Law at Durham Law School. Having studied at the universities of Fudan, Nanjing and Göttingen, he received his doctorate in law from the George-August-University of Göttingen. He held the post of Postdoctoral Research Associate in Intellectual Property and Global Regulation at the Centre for Research in the Arts, Social Sciences and Humanities (CRASSH), the Centre for Intellectual Property and Information Law (CIPIL), and Wolfson College of the University of Cambridge. He was Visiting Academic of the Programme in Comparative Media Law and Policy (PCMLP) based at the Centre for Socio-Legal Studies (CSLS) of the University of Oxford. He was a Konrad Adenauer scholar and research fellow at the Institute for International Law and European Law and the Sino-German Institute for Legal Studies of the University of Göttingen. He was a senior legal expert at the Mercator Institute for China Studies (MERICS). He is an associate of the CIPIL in Cambridge, and a fellow of the Royal Society for Arts, Manufactures and Commerce (FRSA). In the academic year of 2021-22, he will be on research leave in the Michaelmas Term and Epiphany Term and a visiting fellow of the Information Society Project (ISP) at Yale Law School.

Dr Chen is enthusiastic in teaching and active in disseminating his research results through academic, professional and media outlets. He is a fellow of Higher Education Academy (FHEA). He taught undergraduate and LLM courses of Chinese constitutional law, Chinese administrative law, and Chinese copyright law at the Göttingen Summer School of Chinese Law. He was a faculty member of the Anneberg-Oxford Media Summer Institute and the CIPIL seminar at the University of Cambridge. He participated in professional training of Chinese legislators and judges in Germany. He coached Jessup moot court teams and is regularly invited to act as a senior judge in international rounds of the Oxford Price Media Law Moot Court. He was invited to talk at the World Intellectual Property Organisation, and served on the Scientific Advisory Board of Göttingen Journal of International Law. Besides, Dr Chen articulates opinions on a wide range of issues concerning China’s legal development, and has published articles in opinion outlets such as Oxford Human Rights Hub, Cambridge Core Blog, YaleGlobal Online, The Diplomat, ChinaFile, South China Morning Post, and Die Zeit. He has accommodated media interview requests from the Reuters (UK), Deutsche Welle (Germany), Foreign Policy (US), Weekendavisen (Denmark), etc.