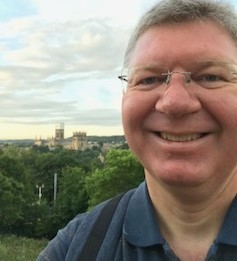 PhD student & Teaching Assistant in the Department of Theology and Religion

Originally I’m from Phoenix, Arizona. I completed a B.A. in Church Ministries at Southwestern Assemblies of God University (1990-1994), and then did a Master of Divinity at the Assemblies of God Theological Seminary (1994-1997). I then spent nearly four years teaching theology in Singapore (1998-2001). After some time doing independent research in the States, I spent four years in Rostock, Germany (2003-2007), where I taught English for Berlitz and studied part time at the local university. I returned to the US, where I worked a variety of non-academic jobs. Wanting to further my studies, I went to The London School of Theology and completed a PhD in New Testament (2011-2015). My dissertation was published with Paternoster in 2017 as Ritual Water, Ritual Spirit: An Analysis of the Timing, Mechanism, and Manifestation of Spirit Reception in Luke-Acts. After a stint at being a nondenominational chaplain in Massachusetts, and a year of teaching in a Christian school in California, I decided to continue in the academic track and began PhD studies at Durham University under Professor Douglas Davies (2017-present).

My current research employs narratological approaches to Luke-Acts to understand Luke’s perspective on Christian initiation and Spirit reception. I then interpret that data in terms of the anthropology of religion. I demonstrate exegetically that Luke both describes and prescribes a coherent initiation ritual. I show that Luke deploys a variety of literary and rhetorical tools to establish for his implied reader narrative structures of normativity. Luke’s ritual structure is internally consistent and allows for minor variation, something that is consonant with the findings of modern ritual studies. Luke’s standard initiation ritual is as follows: Belief in the kerygma, repentance, water immersion, persistent prayer by initiate to receive the Spirit, prayer by ritual elder(s) to invoke the Spirit, handlaying by ritual elder(s) to impart the Spirit, dissociative tongues-speaking theologised as the experience of Spirit reception. Minor perturbations of the ritual may occur due to temporary lack of ritual elders or to the spontaneity of ritual performance.

I analyse this exegetical data in terms of the anthropology of religion. The variety found in Luke’s ritual is due to the distinction between liturgical ritual, the fixed, formulaic behaviours a priest in a temple might carry out, and performative ritual, namely the exercise of a wide repertoire of behaviours such as a ‘shaman’ might be expected to perform. The power or mana resides not in the ritual act, but in the ritual performer. Thus Simon the Sorcerer covets the power that the Apostles Peter and John exercise at will.

My analysis extends to Paul and John. In short, Luke, Paul, and John all exhibit liminality in their understanding of Christian initiation. Liminality (limen - threshhold) is betwixt and between, neither in nor out, ambiguous space. Luke discourses at length upon initiates in a liminal state, whereas Paul assumes his audience has already been fully initiated. John addresses the liminal stage only slightly more than Paul, speaking of being born ἐξ ὕδατος καὶ πνεύματος, that is, with reference to the Baptist's purifying water baptism and Jesus' greater baptism in the Spirit. Ultimately, John presents Jesus the ritual performer breathing to 'impart' the Spirit.

In summary, for the New Testament documents, in so far as their discussion of ritual behaviour acurately reflects the Early Christian Sect (as an aspect of verisimilitude, I suggest that NT ritual descriptions/prescriptions do reflect actual practice) I conclude three key points. Spirit reception is not instantaneous, but liminal; it is not automatic, but mediated; it is not unmarked, but manifested. All Early Christian Sect initiates experienced ASC glossolalia (Altered States of Consciousness, dissociative tongues speaking) which was theologised as the Spirit reception (aka Spirit Baptism, or indwelling) experience.

These conclusions are significant both for theology and for the anthropology of religion. Theologically, the question of when and how the Holy Spirit comes to a new convert has been answered with great diversity by the various Christian traditions: Orthodoxy (it’s in the oil of chrismation, as a substitute for apostolic handlaying), Catholicism (it’s baptism combined with a strengthening in confirmation), Protestantism (variety: in the moment of God’s sovereign act of regeneration; in the moment of the individual’s faith in Christ, in the water of baptism), Pentecostalism (it’s two part: indwelling at initial faith, empowerment and/or sanctification at subsequent Spirit baptism).

However, modern tools for narrative analysis call these views into question by laying bare the liminal, mediated, and highly experiential, perspective of NT initiation ritual. As a liminal experience, the Spirit’s indwelling does not regularly coincide with the moment of faith. As a mediated experience, indwelling is not received without the ministry of the church. As an experiential phenomenon, indwelling does not take place apart from dissociative tongues. A new, robust theological paradigm is needed that answers to the delimitations of modern narrative exegesis.

In terms of the anthropology of religion, the performative and experiential nature of Early Christian Sect initiation must be explored. It is Imagistic, yet Doctrinal. Vivid ASCs are combined with frequent teaching. This high intensity, high frequency mode of religiosity burned up large amounts of social energy. Some of that energy came from cash infusions: people sold their property and donated large sums to the sect leadership. But the ASC initiation itself generated social energy through identity fusion. The mildly dysphoric experience of water immersion combined with the dysphoric/euphoric mix of ASC spirit-possession functioned to bind/fuse the new initiate to the group identity and thereby release fresh social energy with every new initiation. Ongoing practice of ASC experiences, such as those described by Paul, 'I will come into visions and revelations of the Lord' (2 Cor. 12:1), as well as the effervescent corporate practice of glossolalia and prophecy, combined with the considerable performative abilities of Early Christian Sect healers and miracle workers, functioned to continually refresh the social energy needed to maintain high energy/high frequency religion.