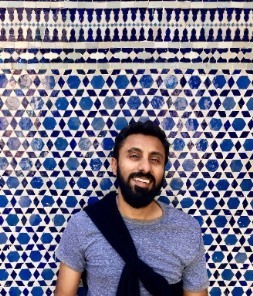 My work demonstrates how the methods, concerns, and reading practices of comparative literature can illuminate the cultural lives of societies that were neither structured by the nation-state nor mediated by European languages. By combining the perspective and analytical instincts of a comparatist with philological training in three key Islamicate literary idioms (Classical Arabic, Persian, and Ottoman Turkish), my research seeks to redress the imbalances of epistemic power that have shaped the field of comparative literature.

My first book, How Do You Say “Epigram” in Arabic? Literary History at the Limits of Comparison, uses the methods of archival literary history, Classical Arabic philology, and translation to explore the limitations of the epigram as a category in literary studies. By bringing to light the previously unknown history of Arabic maqatiʿ-poetry, the book demonstrates how extra-European literary histories can inform and radically transform both the intellectual basis of comparative literature and the landscape of world literature.

What reviewers have said:

“in exemplary fashion, [the second half] of the book broadens a study of works in a single language into a conversation across several fields, laying bare often invisible aspects of each discipline’s boundaries and tenets”—R. Schine, al-ʿUsur al-Wusta

“In identifying a distinct new genre, Talib opens up the field to several new avenues of exploration.” — L. Harb, Journal of Arabic Literature

“a careful work of analytical literary history and a thoughtful meditation on methodology and the history of scholarship.” — M. Keegan, Middle Eastern Literatures

I am currently at work on my second book, a study of how acts of sexual violence, coercion, and harassment are represented in pre-modern Islamicate literatures and how these representations have been understood, contested, and interpreted by different communities over time. This book draws on literature in Arabic, Persian, and Ottoman Turkish (as well as other Islamicate languages that I access through translation) in a variety of forms, including poetry, legal texts, narrative, and historiography, as well as premodern visual representations and contemporary interpretations in media. This reflection on the prevalence of sexual violence, coercion, and harassment in the prestigious canon of Islamicate literatures will encourage scholars and students to engage with and further develop an ethics of reading and teaching.

The articles and essays I write are eclectic, but they are all more or less about the same problem: what are the institutions, practices, and forms of knowledge that give literature its characteristics, functions, and meanings. My primary objective is to articulate methodologies for interpreting, teaching, and valuing the literary lives and afterlives of non-modern, non-European societies. Please see the complete list below.

In collaboration with co-editors, I have published two collected volumes on new areas of research in the history of Arabic literature. The first of these, The Rude, the Bad, and the Bawdy: Essays in honour of Professor Geert Jan van Gelder edited by Marlé Hammond, Arie Schippers, and me, was published by the Gibb Memorial Trust in 2014. It brings together eighteen studies on obscene discourses in the history of Arabo-Islamic literature. My own contribution to that volume reads obscene boasting about sexual domination in pre-modern Arabic poetry in conjunction with contemporary hip-hop by women artists like Lil' Kim to uncover the potentially parodic dimensions of both. The essay was written before Nicki Minaj's re-invention in her 2014 album The Pinkprint and the emergence of artists like Cardi B and later Megan Thee Stallion, but astute readers will be able to carry the argument I developed in that essay into the present.

The second edited collection took the form of a special issue of the journal Annales Islamologiques (vol. 49, 2015), which Monica Balda-Tillier and I edited and introduced. That special issue comprises six articles on neglected, unknown, or unappreciated Arabic literary sources from the period 1200–1800. The article I wrote for that special issue brings to light a previously unknown manuscript, which is the earliest source for the poetry of the Egyptian statesman and poet Ibn Maṭrūḥ (d. 1251).

In my teaching, I have the pleasure of introducing first-year students to the study of the cultures of the Middle East and to work with students in their second year on approaches to reading modern and premodern Arabic literature. Dr Marc Schachter (French and Italian) and I also offer a module on histories of gender and sexuality in the ancient and premodern societies of the Mediterranean basin. This is currently the only translingual module offered in the School of Modern Languages and Cultures. I work with fourth-year students with advanced Arabic language skills to survey literary representations of difference and marginality (including time, sexuality, age, ethnicity, language, etc.). Before joining Durham University, I had the pleasure of teaching Classical Arabic literature at the American University in Cairo from 2012 to 2017.

I have worked with MA and PhD students doing research into a variety of subjects, including Arabic poetry in West Africa, representations of gender in premodern Arabic historiography, popular memory in Egyptian TV shows, Coptic responses to the plague, and others. I welcome emails from prospective applicants for MA or PhD degrees and postdoctoral fellowships.

I am a co-editor of Middle Eastern Literatures, a journal devoted to the practice and potential of a comparative literature that resists Euroamerican supremacy and epistemic power. Before taking up this editorship in 2021, I spent four years as the associate editor of the Journal of Arabic Literature responsible for pre-modern submissions. I'm a member of the board of directors of the scholarly association Middle East Medievalists, the editorial board of the Journal of World Literature, and the advisory board of Gorgias Press' Modern Muslim World book series. I'm also on the jury of Gorgias Press' Classical Islamic World Book Prize and serve as a consultant to The Global Humanities Translation Prize. In 2020, I chaired the Middle East Medievalists' Best PhD Dissertation Prize. I have been asked to review grant applications by the ERC, DFG, and other funding bodies.

I studied literary translation with the late master Michael Henry Heim while I was an undergraduate at UCLA. I've translated four novels from Arabic into English as well as several shorter pieces. My co-translation of Raja Alem's The Dove's Necklace tied for 1st place in the Arabic-to-English category at the 2017 Sheikh Hamad Award for Translation.