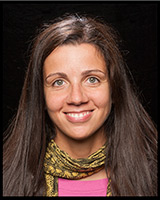 Marie Curie Postdoctoral Fellow in the Department of Archaeology

I am currently a Marie Skłodowska-Curie Fellow at the Department of Archaeology at Durham University under the supervision of Dr Penelope Wilson.

I am a specialist in Egyptology with multidisciplinary research interests (material culture, archeology and philology).

I took my BA (2008) and MA degree (2010) in Egyptian Archaeology at the University of Pisa (Italy). My MA dissertation has provided me with linguistic and philological skills with the translation and study of an ancient text (Late Egyptian -the naos of El-Arish-).I then completed my PhD at the University of Turin in 2014. I focussed my PhD research on the historical, environmental and social dynamics of western Delta Egypt. The aim was to produce for the first time a comprehensive research of VII province of Lower Egypt (Western Harpoon-province), located in the westernmost part of the Delta of Egypt. In chronological terms, this research has addressed the material culture from the Old Kingdom to the Ptolemaic Period. The research has opened new horizons on a topic rather obscure in Egyptology: the “sacerdotal specific titles”, which is the starting point of my Marie Curie project.

I have worked on several excavations in central Italy (Populonia, San Genesio, Loreto Aprutino, Catignano) and since 2010, I have regularly participated to archaeological missions in Egypt: Thebes-University of Pisa-, Tell Mutubis -Egypt Exploration Society/Durham University-, and Zawyet el Sultan -University of Cologne/University of Pisa-.

Inside the mind of ancient People: the tangible and constructed landscape of the western Delta in the Late Period (664-332BC) -MAP- aims to generate an experimental fusion between “sociology of space” critical theory and the material and textual evidence offered by ancient Egyptian society, in order to examine the constitution of space as product of social action or social structures, and recursively to identify the points of contact where the landscape shaped and changed the mind of people. The “regionally specific sacerdotal” officials during the Late Period (664-332 BC) in the western Delta of Egypt (2nd-7th provinces of Lower Egypt) is adopted as the research-program case-study. The goals of MAP will be achieved adopting an intradisciplinary methodology through - the analysis of the “regionally specific sacerdotal” officials inside written and artifactual sources; -the landscape archaeology in order to provide a plot map of the physical environment; and - a comparative dimension aimed to generate a theoretical model, which will open new horizons on how humans and the environment interacted, how the environment changed in the mental process and how the mental process was entangled in a tangible geography.

MAP project has received funding from the European Union’s Horizon 2020 research and innovation programme under grant agreement No. 744977.

Sept 2017-Aug 2019: MAP Project -Inside the mind of ancient People: the tangible and constructed landscape of the western Delta in the Late Period (664-332BC)-, funded by the European Union’s Horizon 2020 research and innovation programme under the Marie Sklodowska-Curie grant agreement N. 744977.

Jan-Apr 2014: Fellowship at the Institute of Archaeology at University College London (UCL) funded by “Fondazione Ricerca e Talenti” (University of Turin). Topic: “Study of the religious topography of the western Delta-7th nome of Lower Egypt-”.