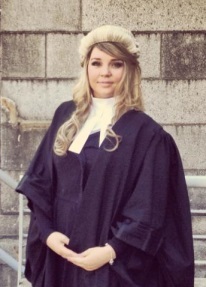 Member of the Durham Law School

Sorcha Mc Cormack joined Durham law school in October 2013 as a PhD student. She has previously graduated with a BA in English and Legal Science (2.1) and an LLB (2.1) from the National University of Ireland, Galway. The following year she went on to complete a Masters in International Criminal Law (2.1) in the National University of Ireland, Galway. In 2013, she qualified as a Barrister-at-law from the Honoroble Society of Kings Inns. In 2010, she won the Lexis Nexus Butterworths law prize which is awarded to the student who receives the highest results in Legal Science BA degree.

She is in the first year of her PhD. Her research relates to the law of rape and intoxication. The title of her thesis is “Drawing the Line: finding the balance between sexual autonomy and protecting vulnerability through intoxication”. This thesis aims to ask how the law should be reformed to take consideration of sexual autonomy whilst protecting victims who are vulnerable to rape through intoxication. It will be asked where the line should be drawn to avoid an over-paternalistic approach while acknowledging the vulnerability of intoxicated victims. Currently, section 75(2)f of the Sexual Offences Act 2003, provides involuntarily intoxicated rape victims with certain protections (a rebuttable presumption); whereas the law is unclear as to when a voluntarily intoxicated victim is incapable of consenting. R v Bree [2007] EWCA 256 found that drunken consent is still consent; yet it argued that the capacity to consent may evaporate before unconsciousness. The point at which capacity to consent will evaporate is unclear and remains undefined. For example, R v Dougal [2005] Swansea Crown Court (unreported), following Bree, deemed the complainant was ‘conscious’ and therefore capable of consenting even though she was so intoxicated she could not remember the incident.

She will perform a critical analysis of the law in England and Wales to establish where the balance between sexually autonomy and protecting vulnerability currently lies. She will compare the legislation and its interpretation of consent, incapacity and intoxication to the approach of Canada and territories of Australia; in analysing and comparing their approaches she intends to find the most appropriate solution. The thesis will also examine theories of ‘consent’, ‘capacity’ and ‘vulnerability’. It will be asked how these terms are understood and interpreted and whether these terms should or can be defined. This will provide a fuller understanding and help answer whether it will ever be possible to ‘draw the line’. Her original contribution will therefore be finding the most effective approach through comparative analysis and suggesting reforms based on this that allows for sexual autonomy, yet protects vulnerable intoxication victims.

Gender and Law at Durham (GLAD)

Centre for Criminal Law and Justice