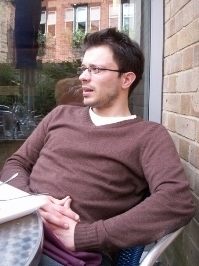 Professor in the School of Modern Languages and Cultures
Telephone: +44 (0) 191 33 42909
Room number: A42, Elvet Riverside I
Associate Director in the Centre for Culture and Ecology

I receive around a dozen requests for supervision per year for PhDs on topics covering all areas at the intersection of continental philosophy, politics, and science and technology studies. Most of my current students work on Stiegler and related figures (Gilbert Simondon, Jacques Derrida, Catherine Malabou, David Graeber, Georges Canguilhem, Peter Sloterdijk and Byung-chul Han), to some degree, but I have previously supervised doctoral students on names from across the range of twentieth-century continental political philosophy, from Weil, Bachelard and Heidegger to Derrida, Deleuze, Jameson and Donna Haraway.

I am less interested in narrowly philosophical projects than in interdisciplinarity, combining philosophy (continental or analytic), for instance, with STS, biology and neuroscience, psychoanalysis and evolutionary anthropology. I am particularly keen to supervise projects in the field of Digital Studies, which is to say, exploring the interrelationship between technology, biology and cultural production. I would be pleased to look at postdoctoral research applications in these areas, too, and have previously mentored postdocs on projects including the work of Henri Atlan, digital philosophy, and Anthropocenic theory.

I am a (‘continental’) political philosopher by training and continue to work primarily in this field, but with an increasing emphasis on how contemporary politics is shaped by interactions between technology and biology. My first book, Politics of the Gift, looked at anthropology, economics and politics in the work of thinkers including Jacques Lacan, Gilles Deleuze and Jacques Derrida, exploring how they took on emerging anthropological ideas about exchange (notably gift-economics) as a way of moving beyond traditional Marxism, but also as a way of reinventing the institution of philosophy, which was threatened with obsolescence by the rise of the social sciences. My more recent work poses the same questions, while moving from the social to the harder sciences: what role in the construction of society, if any, does philosophy still have to play in an era dominated by neuroscience, bioscience and computational capitalism? A major strand of my work has focused on how technological organs ‘exapt’, or reinvent, the products of evolutionary history, transforming our experience of the world, desire and attention. Related to this, I have worked extensively on the relationship between addiction and social organisation, and on the surprising role that philosophical engagements with technology addiction have played in the history of philosophy, including in the work of Plato and Kant. I have argued that both climate change and the current proliferation of ‘fake news’ are inseparable from a global economy organised around the systemic manufacture of consumption addiction – understood in the full clinical sense of the term –, and need to be treated as such. I am now moving from research on ‘hyperdopaminergic diseases’ and their relation to the stressful ecology of contemporary living to broader questions of immunology, including the relationship between the virulence of Covid-19 and a general immunological fragility that can be attributed to the sedentary, inflamed, lifestyles of late capitalism. This work will be written up in my current, endlessly delayed, monograph project, Anthropocene Animals, which explores technology as a mode of selection and its relation to anthropogenic climate change.

My main interlocutor on this research is the philosopher of technology, Bernard Stiegler, with whom I began close collaboration in 2008. I served as a director of Stiegler’s think tank and lobby group, Ars Industrialis, from 2014 until its reinvention, in December 2019, as the Association des Amis de la Génération Thunberg (AAGT), formed in conjunction with the French wings of Youth for Climate and Extinction Rebellion. I was a founder member of AAGT and serve on its board. Following Stiegler’s death in August 2020, I now chair the Collège Scientifique of his Institut de Recherche et d’Innovation, housed in the Centre Pompidou in Paris. I am a lead member of Stiegler’s Digital Studies Network and am, allegedly, still working on another long overdue monograph, Bernard Stiegler: Philosophy in the Age of Technology (for Polity); plus a collection of interviews, which now needs reframing in light of his death.