Customers will change routines in return for lower electricity bills 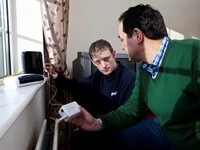 The Customer-Led Network Revolution (CLNR), has published its findings from one of the largest qualitative studies of consumer energy electricity use recorded. A new video has also been released about engaging customers in the smart grid.

The report sheds invaluable light on consumers’ everyday electricity usage and the potential for customer flexibility, whether they are willing and able to shift their usage to outside periods of peak demand for electricity. This is just one solution that CLNR is investigating, which could help to create a ‘smarter powergrid’ that can cope with future energy demands and the anticipated uptake in low carbon technologies to help meet UK government decarbonisation targets.

As part of the project over 9,000 customers’ electricity usage is being monitored to better understand patterns of electricity consumption and the factors which are driving changes in energy use.

Many of those involved also have low carbon technologies such as heat pumps, electric vehicles and solar PV, or are taking part in time-of-use (ToU) tariff trials. Their consumption and generation is being analysed using enhanced monitoring and smart meters, to give insights into the impact these low carbon technologies could have on electricity networks.

More than 1,250 residential and 150 SME customers have completed an online survey conducted by Durham University and in conjunction with National Energy Action, the university has carried out in-depth face-to-face social interviews with a further 250 customers.

Dr. Gareth Powells, from Durham Energy Institute, said: “The way people use electricity has changed dramatically in the last decade. People are much more reliant on technologies such as laptops and smart phones and the electrification of vehicles and heating is becoming more popular, so our findings reveal some really fascinating insights into how people are using electricity and how much they are prepared to be flexible in this use. We’ve also found evidence that as time and space boundaries between home and work are becoming more blurred, with more people working from home or working flexible hours for example, their use of electricity and how they relate to the grid is also starting to change.“

ToU trial participants, who are on a tariff which offers them a financial incentive to use electricity outside periods of peak demand (typically weekdays 4-8pm), and those customers with solar PV in particular demonstrated a greater understanding of how they consume electricity and an openness to be more flexible in their energy consumption.

Dr. Gareth Powells explains: “Overall those taking part in the ToU trials have both reduced their electricity consumption noticeably during peak hours and their overall consumption slightly, which suggests that an increased awareness of the household’s energy use has an effect on how much electricity people use as well as when they use it.

“The findings have revealed that trial participants have expressed a willingness to adapt their some of their usual behaviour, in terms of carrying out daily chores including laundry, hoovering and washing up, to shift their electricity use to outside of the peak demand period, particularly to make better use of ToU tariffs. There’s clearly an increased sensitivity to the cost of energy, so this is a key incentive for trial participants to change their energy use.

“The study has also highlighted a greater awareness of energy use in solar PV customers. In particular PV owners with smart meters and in-home energy monitors found they helped them to better understand their own energy use and generation.

Download the DEI briefing note of the findings in the latest social science report.

View the latest CLNR video on 'Engaging customers in the smart grid'.

See all the video’s produced by the project at the CLNR video library.

Led by Northern Powergrid and part funded by Ofgem’s Low Carbon Networks Fund, the project is the largest of its kind in the UK and is being completed in partnership with Durham Energy Institute, British Gas, Newcastle University and EA Technology. The findings from the project will be shared with other DNOs to help the electricity industry prepare for the challenges presented by a low carbon future.