DEI are bringing DEI seminars to your home with our new online seminar series. Seminars will be held weekly and registration links are in the seminar links below. Logins and passwords will be emailed to attendees on the morning of each seminar.

In this joint seminar with the Centre for Cultural Ecologies, we will look at how the academy has explored how “dirty” energy has led to violence, environmental destruction and poverty. We know how the renewables sector, in some contexts, reflects neoliberal modes of power and can subsume social outcomes to economic ones. But we still lack a clear picture of how green energy is implicated in human rights abuses and colonialism in some settings.

In this paper, we firstly argue that the green energy industry is, in the context of Moroccan-occupied Western Sahara, in danger of replicating the neocolonial and violent culture of the fossil fuels industry. We use Critical Discourse Analysis to show how Western corporations contribute discursively and physically to Morocco’s settler colonial project in Western Sahara. At the same time though, Saharawis (the indigenous people of Western Sahara) challenge energy injustices, often using the arts as their weapons. In the second part of the talk, Dr Allan analyses Saharawi resistance poetry, which, she argues, makes aesthetic use of Western Sahara’s winds to challenge the colonising discourses of corporations that appropriate Saharawi lands. Then, from an activist perspective, Mr Lakhal discusses the campaigning efforts of Saharawis living under occupation and the dangers they face when taking on the global actors that exploit their country’s natural resources.

Joanna joined Northumbria University's Centre for International Development in March 2019, where she is continuing a Leverhulme Early Career Fellowship. Before this, she was a Research Fellow (2018-2019) and Teaching Fellow (October 2016-2017) in Hispanic Studies at Durham University. Her monograph, Silenced Resistance: Women, Dictatorships, and Genderwashing in Western Sahara and Equatorial Guinea is out now with University of Wisconsin Press.

Hamza Lakhal is a PhD student in the Department of Anthropology at Durham University. 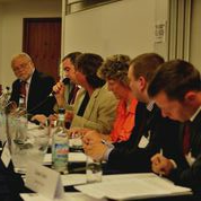