David Campbell is Professor of Cultural and Political Geography at Durham University. His research deals with the visual culture of geopolitics and international relations, political theory and global geopolitics, and US security policy. The author of Writing Security: United States Foreign Policy and the Politics of Identity and National Deconstruction: Violence, Identity and Justice in Bosnia - which won International Forum Bosnia's Bosnia-Herzegovina Book of the Year 1999, and was published in translation Sarajevo in 2003 - this work deals with security policy in terms of the politics of identity and representation.

For the last few years he has been working in various ways on the visual - in particular the practice of documentary photographers and photojournalists - as a site of international politics that extends earlier conceptualisations of  representation. It is hoped that these thoughts will come together in a project about the visual economy of Sudan in the post-WWII period. Some of these ideas have been trialed for different photographic audiences, including the 2005 Sem Presser Lecture ("Has ‘Concerned Photography' a Future?") at the World Press Photo Awards in Amsterdam, as well as graduate photojournalism students in the UK, China and the Phillipines. They have also informed his role as one of the curators/editors of the Imaging Famine project, as well as a research report on The Visual Economy of HIV/AIDS completed in 2008. From 2009-2013, Prof. Campbell will serve as the External Examiner for the MA Photojournalism and Documentary Photography, London College of Communication, University of the Arts.

(Co-edited with Michael J. Shapiro), 'Securitization, Militarization and Visual Culture in the Worlds of post-9/11', a special issue of Security Dialogue, 38.2 (2007)

'Salgado and the Sahel: Documentary Photography and the Imaging of Famine', in Rituals of Mediation: International Politics and Social Meaning, ed. by François Debrix and Cindy Weber (Minneapolis: University of Minnesota Press, 2003), pp. 69-96

'Atrocity, Memory, Photography: Imaging the Concentration Camps of Bosnia -- The Case of ITN versus Living Marxism, Part I', Journal of Human Rights, 1.1 (2002), 1-33 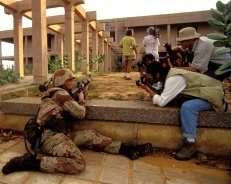