The past twenty-five years have witnessed the proliferation of photography studies across numerous disciplines: art history, history, languages and literature, anthropology, museum studies, to name just a few. Yet this breadth of scope has gone hand in hand with the establishment of a relatively narrow canon of theoretical writings and a rigid conceptual orthodoxy. Walter Benjamin, Susan Sontag, and Roland Barthes remain the central reference points for most writers on photography, and the discourse on photography returns constantly to certain common tropes: the photograph as death, the camera as weapon, the gaze as a means of objectification and subjection, the photograph as index. Thinking Photography (Again) set out to interrogate and challenge the dominant paradigms of contemporary photography studies, and to rethink both the medium of photography itself and the discourse to which it has given rise. It featured keynote papers by Victor Burgin and John Tagg, reflecting on the period since the publication of Burgin's landmark Thinking Photography (1982), as well as contributions from key contemporary scholars such as Elizabeth Edwards, Shawn Michelle Smith and Geoff Batchen. The conference formed the basis of an exciting collection of essays, Photography: Theoretical Snapshots, published by Routledge in 2008, which features contributions by some of the most important figures in the field, as well as challenging new work by young and emerging scholars. 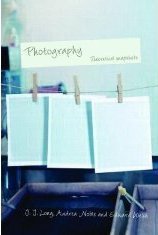