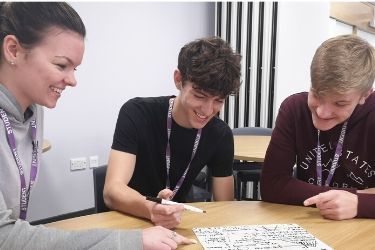 2019 was the year we taught science in Low Newton prison, suggested our solar system has its own black hole and announced plans for a new specialist maths school. In the second in a two-part series, we review the second six of 12 Stories to Remember from 2019.

2019 began with Dr Phil Heron teaching the first face-to-face science course in an English prison – Low Newton, near Durham. The Gateshead-born academic worked without any scientific equipment and is now looking to roll out the course at other prisons.

2. A boost for the region’s young mathematicians

Another teaching venture we announced this year beyond our own students was Durham Mathematics School. A partnership with Durham Sixth Form Centre, the post-16 school is due to open in 2022, welcoming talented students from the North-East, North Yorkshire and Cumbria.

As well as looking to the next generation, we've been shedding light on our shared past this year. In August, we announced the purchase of the archives of John George Lambton, first Earl of Durham. Known as ‘Radical Jack’, the Earl was a major force for reform in the 19th Century. It will be made available to view, free of charge, at Palace Green Library, Durham.

In March, visiting researcher Dr Benjamin Pohl discovered a forgotten Royal charter from 26 March, 1200 – the first year of the reign of King John. Sadly, it made none of us millionaires: rather confirming the granting of possessions in County Durham, including the hamlets of Cornsay and Hedley Hill, to Walter of Caen and Robert FitzRoger, Lord of Warkworth and Sherriff of Norfolk and Suffolk.

Durham is one of the world’s top universities for astronomy and cosmology research and in October, researchers suggested that there might be a black hole in our solar system. Physicists have speculated that the orbits of huge chunks of rock and ice in the outer solar system might have been influenced by a new planet called Planet 9. The new theory suggests Planet 9 might be a small black hole left over from the Big Bang.

To end on a hopeful note: a team including Durham solved the puzzle of why a certain type of solar panel is much more efficient than others. If you’re wondering, the key is adding selenium, which stops electrons becoming trapped and lost. Probably don’t try it at home...