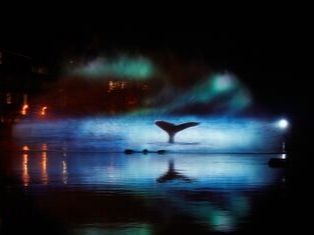 The organisers of Lumiere have announced that Mysticète – “the whale in the river” – will return for this year’s light festival.

A special tenth anniversary edition will take place in Durham from Thursday 14 to Sunday 17 November.

The festival is produced by Artichoke, commissioned by Durham County Council and we’re a major partner.

Mysticète is a 3D projection of a Baleen whale emerging out of the water.

It was created by design agency Top’là and visual artist Catherine Garret, and was a popular feature of Lumiere Durham 2015.

This year, it will be found on the River Wear at a new location, north of Pennyferry Bridge.

What else can I see and do?

We’re proud to be hosting Keys of Light, an interactive art installation by Dutch artist Mr.Beam, at Rushford Court, home to our John Snow College.

Further details about the festival programme will be revealed nearer the time.