Chinese treasures on show, thanks to refugee of Nazi regime 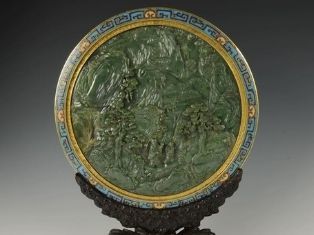 Priceless Chinese art is to go on show at one of our museums, in memory of a generous philanthropist who fled the Nazi regime.

A collection of Chinese jades will be exhibited at our Oriental Museum, following a donation made in memory of Gerard Arnhold.

Who was Gerard Arnhold?

Born in 1918 in Dresden, Germany, Gerard was from a well-known family of Jewish philanthropists.

His family left Germany in 1936, after the Nazis came to power and seized their assets.

Gerard served in the British Army during the Second World War, before starting a successful technology company in Brazil.

He and his family supported rebuilding efforts in Germany and many charitable causes, always working anonymously.

Gerard was also a generous supporter of the Oriental Museum for many years – a fact his family allowed to be publicly acknowledged after he died in 2010.

What can I see?

They represent the highest levels of craftsmanship, including from the imperial workshops.

They are all from a major donation of Chinese art made in 2016 in memory of Gerard, for which we’re very grateful.

The exhibition is titled ‘In Pursuit of Excellence: Chinese Jades from the Gerard Arnhold Collection’.

It runs from Friday 14 June to Sunday 15 September.

Entry costs £1.50 for adults and 75p for children aged five to 16 and over 60s, and is free for children under five and students.

There will also be a public lecture, family activities and gallery trails.