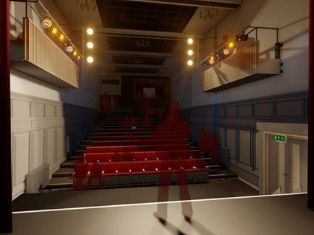 How the refurbished Theatre will look

What would you expect to find hidden under a centuries-old theatre?

Archaeologists excavating our Assembly Rooms Theatre believe they have found parts of a medieval defensive wall for Durham’s inner Bailey. The structure was demolished around the late 16th Century and was previously thought to have completely disappeared.

They found the sandstone wall two metres under what used to be the theatre’s dressing room toilets.

Why were they digging?

It’s a £2.4m, year-long project to make more parts of the venue accessible to wheelchair users and people with prams and buggies, restore the original ceiling, and refurbish the Box Office area. The workshop, dressing room and toilet facilities are also being improved.

What is the Assembly Rooms Theatre?

The Assembly Rooms is home to Durham Student Theatre. We have one of the most vibrant student theatre scenes in the country, with 28 companies performing over 100 shows a year to audiences of staff, students and members of the public.

The Assembly Rooms also hosts several resident theatre companies, including Elysium and Grim Up North, and attracts 75,000 visitors per year.

The refurbishment is progressing well and the Theatre is due to reopen in October 2019. Details of upcoming shows will be published nearer the time.

In the meantime, check out Summer in the City, a month-long festival celebrating the best of the City’s theatre, music and art. For full listings, please visit the website.

What else do we know about the Theatre’s history?

It was built in the 18th Century. The oldest surviving reference is a newspaper advertisement from 1741. The building appears unmarked on City maps from the 1750s, and is clearly visible on a map from the 1820s.

In the 19th Century, it was a place where Durham’s fashionable elite would gather to socialise and dance. It was turned into a theatre in 1891, and then became Durham’s first cinema in 1909. We bought it in 1930.