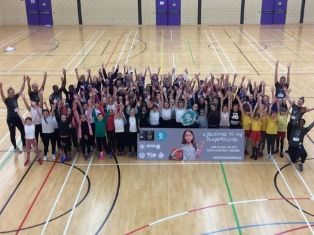 Girls who competed in the basketball festival

We’re passionate about inspiring young people in sport – we believe it not only helps children lead healthy and active lives, but also can have many other benefits for personal development.

That’s why we’re supporting the ‘Her World, Her Rules’ campaign to promote women’s and girls’ basketball.

As part of this, we recently ran a basketball festival at our Queen’s Campus in Stockton-on-Tees. A hundred girls from primary schools across Stockton took part.

This followed a programme of coaching sessions we ran in primary schools across County Durham. These sessions took place weekly for several months and involved both girls and boys.

Among those who helped out were students from our Durham Palatinates team, which has just enjoyed a successful season in the Women’s British Basketball League (WBBL), finishing fifth and reaching the trophy finals in Glasgow, and also reaching the Benecos-UK WBBL play-off semi-final.

We have one of the most vibrant student sport scenes anywhere in the world. Over three-quarters of our students participate in some form of sport, and over 130 of our sportswomen have gone on to represent their country since 2000.

Harriet Ottewill-Soulsby was one of the students who helped at the basketball festival. She plays for the Palatinates, is a ‘Her World, Her Rules’ ambassador and was recently named in the WBBL British Team of the Year.

We’ll be continuing to support the ‘Her World, Her Rules’ campaign in schools during the next academic year.