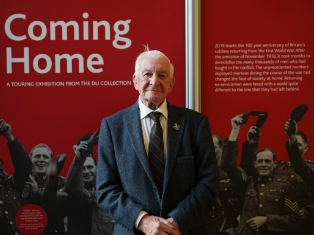 We’re helping to organise a new exhibition exploring what it was like for soldiers returning home from war.

Coming Home investigates the circumstances in which servicemen and women returned from conflict and is the third in a series of five annual exhibitions inspired by the Durham Light Infantry (DLI) collection.

It’s organised by ourselves, Durham County Council and the Trustees of the DLI.

You can learn about how soldiers’ achievements were celebrated and commemorated, and the challenges they faced when they got home.

There are diaries, letters, photographs and artefacts from the DLI Collection. One of the most unusual objects is a glass eye belonging to DLI solider Thomas Willcock, who lost his eye due to shrapnel injury sustained during the First World War.

The exhibition venue is Spennymoor Leisure Centre, entry is free and the exhibition runs until the end of August. Opening times are 7am to 10pm, Monday to Friday; 7am to 6pm on Saturdays; and 7am to 5pm on Sundays.

One of the stories explored is that of Harry Oliver.

Born and raised in Coxhoe, County Durham, Harry was working as a coal miner at Bowburn Colliery when the Second World War broke out and he enlisted as a Private in the newly formed 10th Battalion of the DLI.

In May 1940, he was captured in France and put to work in salt mines in Thorn, Poland. Harry escaped twice, was bayonetted by a prison guard and suffered starvation during his five years as a prisoner of war. Even when victory seemed imminent and the Allies were advancing, his ordeal continued: with the prisoners spending 33 days on a 400-mile forced march to freedom.

When Harry finally returned home, his family, friends and fiancée Margaret laid on a celebration. Harry and Margaret went on to enjoy 67 years of marriage and had two children.

Now 100, Harry was the guest of honour and the exhibition opening, on Thursday 11 April.

He still remembers his ordeal clearly and, despite everything, speaks fondly of his time in the DLI and the people he met along the way.

How we’re honouring the DLI

We have a DLI Collection Gallery at Palace Green Library, which hosts the Courage, Comrades, Community exhibition. For more information, click here.

The DLI’s medal collection is currently on loan to us. Medals can be viewed by appointment. For more information, click here.