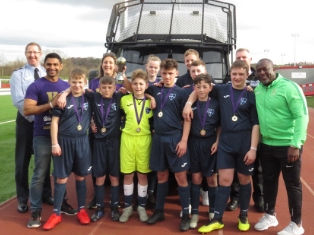 We run the annual KickOff@3 tournament with local police forces, with the goal of developing trust between young people and the police.

KickOff@3 is a national initiative, which was started by a Metropolitan Police officer and a London youth worker.

We have hosted the North East heat, which this year expanded from Durham Constabulary to also include Northumbria Police and North Yorkshire Police.

Boys and girls aged 13 and 14 travelled from across the North East and North Yorkshire to compete at our Maiden Castle sports complex.

Some of our students helped organise the tournament, New College Durham students acted as referees and local community volunteers also helped out.

What happened on the pitch?

The winners were Wellfield School, from Wingate, County Durham, who will now represent the region in the national finals in July. They defeated Norton College 4-3 in a penalty shoot-out following a 0-0 draw in the final.

The tournament raised money for the Bradley Lowery Foundation, to support Ollie Sweeney, who is currently fighting Neuroblastoma.

Quentin Sloper, Director of our Experience Durham, said: “It was great to see so many young people from right across the region enjoying their sport here.

“Sport has the power to bring people together and with the top-class facilities, coaches and athletes we have here, we can play a big part in that. We wish Wellfield every success for the national finals.”