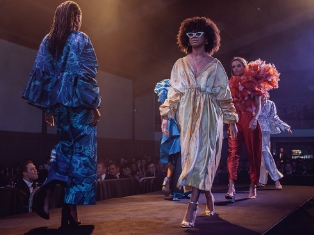 A student fashion show has raised a record-breaking £150,000 for the Environmental Justice Foundation (EJF), shedding light on the environmental and human impact of the fast fashion industry.

2800 people attended the Durham University Charity Fashion Show (DUCFS) 2019 over three nights. The event brought together sustainable designers such as George Clarke, Christopher Raeburn and Larissa von Planta. The spectacle was a visual extravaganza highlighting unsustainable consumer habits and calling for a shift in attitudes, and renewed activism, to protect the planet and its people. The show’s theme, #pullthethread, urged people to be accountable for their consumer choices.

Pippa Tatton-Brown, this year’s Fashion Show President, said: “It’s not just about the show and the money raised. An event like this allows us to encourage activism among the UK student population to bring about a tangible change of attitudes.

“If we can inspire more people to question how they consume, and translate that into action, then we have achieved our goal.”

The DUCFS team ran a series of fundraising events in the lead up to the show itself. These included a ‘clothes swap’ and a Festival of Sustainability in Durham Cathedral featuring talks by Steve Trent of the Environmental Justice Foundation, Lucinda Chambers of Colville, Julie Hill of WRAP UK, and a panel discussion on the future of sustainable fashion with four industry leaders.

Hetty Hodgson, Vice-President of Operations, said: “Our year-long campaign has resulted in more discussion and debate in Durham about sustainability, and it is motivating to see people thinking more consciously about what they buy and wear. The record-breaking figure we have raised to support the Environmental Justice Foundation is testament to that.”