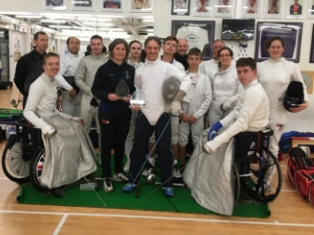 A fencing club that we support has achieved double success at the Active Durham Sport and Physical Activity Awards.

Laszlo’s Fencing Club is based at our Maiden Castle sports complex, where its members use our world-class fencing facilities and equipment free of charge on a daily basis throughout the year.

At the Awards, the club was named Sports Club of the Year and member Duncan Rowlands won Sports Performance of the Year.

Why did they win?

About the club, the judges said: “Laszlo’s Fencing Club is an inclusive environment that caters for everyone from international level to complete beginners. It runs junior, senior and wheelchair sessions and supports all members to achieve at the highest level. More than 25 volunteers from the club helped with the junior and cadet Commonwealth Championships, a major week-long event in July, featuring fencers from all over the world. Without these volunteers, North East Fencing would have struggled to host the event.”

Tell me about the club…

It’s run by Professor Laszlo Jakab, who’s been a leading fencing coach for over 40 years. He also coaches our student fencing club.

What did they say?

Laszlo Jakab said: “This success would not have been possible without Durham University. Our club could not exist without the partnership of the University. We have brilliant collaboration between the two clubs. University fencers often join our sessions and vice versa, and it’s beneficial for all the fencers.”

Quentin Sloper, Director of our Experience Durham, said: “It’s great to see a club we support enjoying so much success. We’ve hosted the club for many years and Laszlo and his team make Durham a real centre of excellence for fencing, both for students and the local community. It’s a model that we believe in and the completion of the upgrade of Maiden Castle will enable us to develop similar initiatives across a range of other sports.”