Expanding our support for children’s hockey 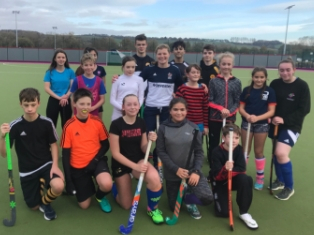 We’ve expanded our support for the junior wing of a local hockey club.

For many years, Durham City Hockey Club’s (DCHC) junior wing, previously known as the Durham Hornets, has been run by a dedicated team of volunteers, producing some outstanding young hockey players.

Claire said: “It’s a pleasure to be working as part of the new partnership at Durham Hockey Juniors. It’s a club I share many happy memories with. Over the years many of my family members have been members at the club in different capacities.

“It’s a brilliant time to be a part of this thriving and vibrant junior section. We’re working with some great players and some very dedicated volunteer coaches.”

Many of our student volunteers involved have played hockey to an international standard and want to give something back to the hockey community.

Among them is Geography undergraduate Tess Howard, of University College, who recently represented Great Britain at the Hockey Champions Trophy in China.

Charlotte Childs is DUHC Women’s 1st team Captain and has represented England at under-21 level.

She said: “Having the opportunity to be involved in the new and upcoming Durham Hockey Juniors through coaching on Sunday mornings has been such a fantastic experience. I couldn’t recommend getting involved enough.

“It’s been so rewarding seeing the exciting young talent that’s out there and the progress being made by these players, as well as being a part of the development of youth hockey. I’ve thoroughly enjoyed being a part of the junior set up in Durham and looking forward to what more there is to come.”

‘The coaching has been amazing’

Since the partnership began three months ago, the number of children involved with the Durham Hockey Juniors has grown to over 90.

Parent Sue Hutchinson said: “My seven-year-old son Ben had been asking if he could try hockey for several months, so I looked on the internet for local clubs to find out further details.

“From our first session four weeks ago, the progress that he has made, along with his enjoyment level, has surpassed my expectations.

“Everything from the friendly welcome to the coaching has been amazing. I’ve particularly liked that the coaching focuses on skills and small sided games and the University players helping have been fabulous.

“Ben played in his first under-10s game last week and loved it and is really excited for more fixtures. I feel like he has found a real passion for the sport and this has been supported and encouraged by the excellent staff. I can’t praise them highly enough.”

How to get involved

Durham Hockey Juniors welcomes children aged 6 to 16, of all abilities. The cost is £4 per session, £50 per term, or £120 per year. For more information or to get involved, please email junior.hockey@durham.ac.uk