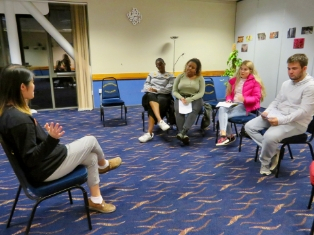 A student-run debating programme is returning for a second year – and local schools are invited to get involved.

The programme is free to schools and runs from November to March, ending with a graduation ceremony.

Mel, a Philosophy and Politics undergraduate, said: “One of the most important skills you can learn is to speak up for yourself. That’s what VoiceIt is about.

“A lot of people think debating is about politics. But this is about improving confidence and communication – real life skills – through debating.”

Shan Sunny, a pupil at St Leonard’s Catholic School, said of his team’s student mentor Jude Waites: “Jude was an excellent mentor who helped us progress through the competition.

“He taught us debating methods extremely well and allowed us to use it in the debate that we participated in at school.

“In addition to that, he made it fun and as a result allowed us to grow our passion for debating. We, the team, agree that without his guidance and encouragement, it would have been very difficult to have won the competition.”

Maureen Smith, a teacher at St Leonard’s Catholic School, said: “The debating workshops offered by the University were both enjoyable and beneficial to our students who arrived enthusiastically every week, whether it be to discuss vegetarianism, capital punishment or the inequality of the examination system.

“Jude facilitated an increase in confidence in those unused to debating and for those students who had debated previously; he offered a structured framework for democratic and disciplined discussion.

“Winning the competition was an added bonus and the triumphant team has started to infuse others with a desire to debate.

“Debating also enhances the skills needed for GCSE English Language Paper 2, as the students are required to read the viewpoints of established writers on a given topic and in turn have to write a text based on their viewpoint.”

Mel said: “I had never done anything like this before. But the students said they really enjoyed the sessions and some schools have asked for the same mentors again this year.”

How to get involved

Mel receiving funding for VoiceIt from Collingwood College’s 1972 Club, a network of alumni and supporters who donate to Collingwood’s Student Opportunities Fund.

Emma Brownlow, Vice-Principal of Collingwood College, said: “Mel’s project is a great example of how donor funding can not only have a direct impact on the development of a Collingwood student, but also have a wide reaching impact in our local community.

“We’re proud of Mel’s achievements so far, and can’t wait to see how VoiceIt grows in future.”