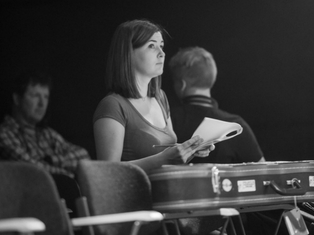 Durham University has helped a Durham-born writer return to her roots in developing her next theatre show.

The University granted Victoria Gimby, a writer and director who grew up in Durham City, an artist in residence placement at its Assembly Rooms Theatre, in order to support her work on scripting ‘Run’.

Run is a play in development which tracks a group of people running a marathon, beginning at the start line and finishing as each character crosses or hobbles over the finish. Each has their own story to tell and each is pushed to their mental and physical limits as they navigate the twists and turns of the route.

The University is hosting a series of artists in residence at the Assembly Rooms Theatre as part of its role in supporting and developing the local cultural scene.

Victoria used her week at the 150-year-old theatre to explore how actors might run and sing on stage. She hopes Run will feature actors running on treadmills built into a theatre stage.

“It has been a very valuable and interesting week,” Victoria said.

“It was very useful to have the space of the Assembly Rooms Theatre to experiment. It has been so nice to be able to come back to my roots for this project.

'Connecting with the community'

As a child, Victoria studied at Durham High School for Girls and was a member of Durham’s Gala Theatre Stage School.

Now based in Durham and London, she was recently shortlisted for a Northern Writer of the Year Award.

Her credits as a director include working as Associate on the new UK tour of the musical Rock of Ages and Associate to choreographer and former Strictly Come Dancing judge Arlene Philips, who has agreed to act as an advisor on the Run project.

While at the Assembly Rooms Theatre, she worked with friends Sam Lupton and Nicola McQuillan, who she met while all three were part of the Gala Theatre Stage School and who are now both successful actors.

The Assembly Rooms is soon to undergo a £2.4m refurbishment, beginning in August.

Kate Barton, Head of Student Theatre at Durham University, said: “Victoria is a wonderfully talented writer and director, and a real Durham success story, and Run is an exciting, ambitious project.

“It was a pleasure to welcome Victoria to the Assembly Rooms.”