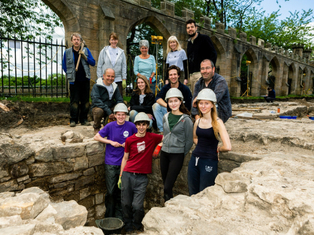 Medieval mysteries, hidden beneath the grounds of a 900-year-old British castle, have been uncovered during a major archaeological excavation.

More than 90 archaeologists, undergraduate and postgraduate students, and volunteers from Durham University and The Auckland Project spent a month peeling back the centuries at Auckland Castle, Bishop Auckland, as part of the latest excavation at the former home of the powerful Prince Bishops of Durham.

Key discoveries include the location of the original medieval chapel, which has remained a mystery for centuries, a 13th Century kitchen and the remains of what is believed to be the oldest defensive building unearthed at the County Durham castle to date.

The remnants of Auckland Castle’s original 12th Century chapel has been lost beneath the Castle grounds since it was destroyed in 1646 by Sir Arthur Hazelrigg, the then Governor of Newcastle who bought the castle at the end of the English Civil War.

In the course of the excavation, the foundation of the chapel’s southern wall was revealed, with the rest of the building believed to be buried beneath the castle’s existing bishop’s study. When unearthed, the chapel’s foundation pillar stones were found split in two, suggesting Hazelrigg may even have used explosives to demolish it.

Elsewhere on the site, close to the Wyatt Arch, archaeologists uncovered the oldest defensive perimeter structure found at Auckland Castle to date. The two to three-story rectangular building, is thought to predate many of the other buildings uncovered on site.

Previous excavations of the site have unearthed a pillared gatehouse and fragments of perimeter walls, dating back to the 13th or 14th Centuries, but this new discovery suggests that Auckland Castle was a large and imposing castle from an even earlier period.

It is believed that this would have served as a clear demonstration of the wealth and power of the medieval Prince Bishops of Durham.

Archaeologists working around the site of Auckland Castle’s medieval Great Hall, which has served as St Peter’s Chapel since its conversion in the 17th Century, also uncovered remains of a 13th Century kitchen with two hearths, which would have served the bishop’s guests.

The final days of the dig also brought a unique discovery, preserved timber from what might be a wooden tank used in the malting process for beer making. The discovery of preserved wood is rare and timber samples will be sent for further laboratory analysis to reveal the age of the tank.

Smaller artefacts such as thimbles, hawking whistles and sword pommels have also been unearthed, offering a glimpse into the day-to-day lives of those living in Auckland Castle in the medieval period.

Professor Chris Gerrard, of Durham University’s Department of Archaeology, said: “The excavations have provided an exciting opportunity to examine the evolution a medieval bishop’s residence.

“Work on this scale has rarely been carried out anywhere in Europe and too little is known of the early development and daily life at sites like Auckland Castle. We hope to rectify that over the next two years and ensure that Bishop Auckland takes its proper place in the medieval and later history of northern Britain.”

The archaeological excavation, which ran throughout June, is the first in a new series of annual digs to be run by The Auckland Project and Durham University, with archaeologists set to return in 2019 and 2020 to continue their research into the early life of Auckland Castle.

John Castling, Community Archivist at The Auckland Project, said: “The findings of this excavation offer us new and valuable insight into the origins of Auckland Castle and the lives of its medieval inhabitants.

“It has been fantastic to see Durham University students working alongside The Auckland Project volunteers to make these fascinating discoveries and we look forward to continuing our work with Durham University over the next two years.”

The archaeological excavation took place as Auckland Castle undergoes a multi-million pound programme of conservation to return the property to its former Georgian Gothic splendour, as designed by renowned English architect James Wyatt, (1746–1813).

If you would like to join Durham University’s Department of Archaeology, we’ll be recruiting academic staff later this year in our Annual Recruitment Campaign. Please register your interest and we will contact you when vacancies are advertised.