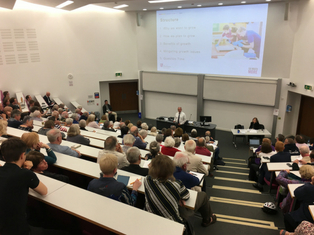 Around 130 residents, business leaders, staff, students and others attended the ‘University and City: Question Time’ community engagement event, which was held at the University’s Calman Learning Centre on Thursday 21 June.

Guests had the opportunity to ask questions of the Vice-Chancellor, during a discussion chaired by City of Durham MP Roberta Blackman-Woods.

The debate covered topics including student accommodation and housing, student citizenship and the local economy.

Professor Corbridge said: “We have been open and transparent about our strategy for growth, which will bring significant benefits not only for the University, but for Durham City and North East England.

“Members of the community asked to discuss the University Strategy with me and I was pleased to be able to do this.

“The questioning was thorough and productive, and a number of issues were identified for us to consider.

“We will do this together as part of ongoing dialogue, working with our local communities to ensure a positive environment for all who live, work and study in our great City.”

As part of a presentation explaining why and how the University is growing, Professor Corbridge gave an update on the work of the new Community Engagement Task Force.

The Task Force is currently developing its scope, membership and Terms of Reference, and developing an Action Plan based on five themes of interaction between the University and City: the economy, culture, citizenship, the living environment and Durham for All.

Further updates from the Community Engagement Task Force and details of future events will be announced in due course.

Partners and residents can make comments and suggestions via an online feedback form, at www.durham.ac.uk/community/haveyoursay.