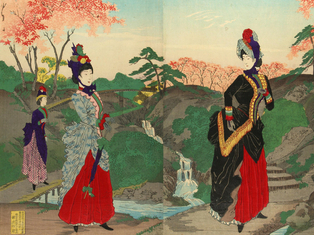 Part of the international 150th anniversary celebrations of the 1868 Meiji Restoration, the exhibition tells the story of how Japan applied Western systems of government, technology, arts, and fashion whilst retaining its own traditions. The exhibition also explores the lasting legacy of this political shift.

It has been created by Durham University MA Museum and Artefact Studies students with the support of the Japanese Embassy in London, the Japanese Consulate in Edinburgh and the National Museum of Japanese History in Japan.

Highlights will include woodblock prints of the Meiji Emperor in 19th century European fashion, a newly-acquired woodblock print of one of the first Japanese steam trains, a Japanese-influenced Christopher Dresser vase on loan from the Dorman Museum in Middlesbrough, and modern products by Japanese companies such as Nintendo.

Other related activities this summer will include public lectures, public screenings of films from the Japanese Embassy, family activities, and gallery trails. Further details can be found at www.durham.ac.uk/oriental.museum/whatson/events/.

Amy Gerus, one of the students in the exhibition team, said: “It has been an incredible opportunity to work with the collection and the Japanese community in Durham.”

Rachel Barclay, Oriental Museum Curator, said: “The Oriental Museum is fortunate to be able to showcase objects not usually on display from this fascinating period in Japanese history. We are very grateful to our Japanese partners for their support.”

The Oriental Museum is open from 10am to 5pm Monday to Friday and noon to 5pm at weekends and on bank holidays. Entry to the museum is £1.50 for adults, 75p for children (5-16) and Over 60s, and free for children under five and students.