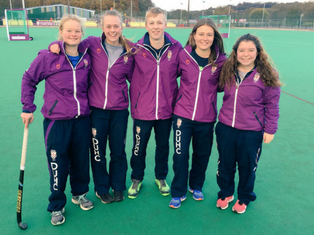 The club was shortlisted for the Innovation prize at the England Hockey Awards 2018 for its ‘Hooray for Hockey’ programme.

DUCH’s Junior Festival, in February 2018, attracted over 200 children from 12 schools and clubs to a Hockey World Cup-themed tournament and was so successful organisers are looking to repeat it this summer.

An eight-year-old boy who took part said: “Thank you so much for organising the Junior Festival. I am having so much fun.”

There have also been Walking Hockey sessions, aimed at helping adults with physical health challenges enjoy the sport. One participant said the sessions were “better than football”.

Finally, a Back to Hockey initiative helped people who had not played for a long time to enjoy it again.

All the sessions are run by Durham University students, giving up their own time to volunteer for the benefit of the community. In all, over 50 students have been involved.

The England Hockey Awards 2018 were led in Leicester on Saturday 19 May.

Performance Coach Gareth Weaver Tyler was shortlisted for Coach of the Year.

Cat McLellan, the Club Captain, said: “To win two awards and be shortlisted for another two on one night was incredible.

“We are very proud of our Hooray for Hockey programme. It was great to be able to help children enjoy hockey for the first time, clubs develop their coaching and adults with disabilities or health issues not miss out.

“We’re also all really pleased for Tess, Jack and Gareth, who have given so much to the club and thoroughly deserve to be honoured in this way.”

DUHC is Durham University’s biggest sports club, with over 200 students involved. The men’s and women’s first teams both play in the national leagues.

Durham was this year’s number one university for hockey in the British Universities and Colleges Sport (BUCS) league, having won three golds and reached four finals and eight semi-finals.

Quentin Sloper, Director of Experience Durham, said: “This is a great example as to how our student performance clubs can also make a unique contribution to the local community.

"The opportunity for young people to be coached by, and rub shoulders with, the next generation of Olympic talent is something quite special and the multi-million pound expansion of our Maiden Castle Sports and Wellbeing complex will enable many more of our sports to develop similar initiatives over the coming years.”