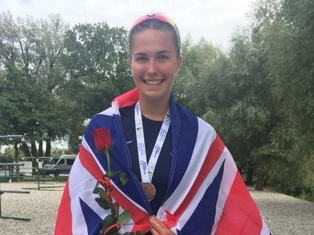 Lauren Irwin at the 2017 European Rowing Under 23 Championships

A Durham University rowing star is helping coach and mentor young people hoping to follow in her footsteps.

Lauren Irwin, who has represented Team GB at the world and European under-23 rowing championships, is now supporting teenagers in North East England to develop their rowing skills, while also helping them manage the other pressures of their teenage years.

Now a Sport, Exercise and Physical Activity second-year undergraduate at Durham University, the 19-year-old has become a JHPA coach.

'I'm pleased to be giving something back'

She said: “I benefitted so much from the JHPA. It was great to learn from rowers older than myself, on techniques, health and how to balance sporting, academic and other commitments. It showed me what I might be capable of in the longer term.

“When given the chance to get involved as a coach, I jumped at it. I am pleased to be giving something back. Hopefully I can help younger women, both in their personal and sporting lives.”

The JHPA offers young people aged 15 to 18 with rowing abilities a six-week training programme. In the one-hour, weekly sessions, participants learn about strength and conditioning, psychology and health.

Julie Shaw, a coach at St Leonard’s Catholic School, Durham City, said: “The St Leonard’s pupils found the sessions very interesting and productive. I learnt a lot and valued being able to be with our pupils during the sessions.

“The students that ran the groups were great fun but took their coaching seriously and I appreciated their time and effort.

“I really appreciated that an athlete of Lauren’s calibre takes the time and trouble to foster and encourage up-and-coming talent and it certainly gave our team a boost.

“I can certainly say that all our pupils are in a much better place both physically and mentally following the course and realise that knowledge is power!”

Miss Irwin, a former pupil of St Bede’s Catholic School, Peterlee, County Durham, is now hoping to be part of the Team GB squad for the 2018 World Rowing Under 23 Championships in Poland in July.

Further ahead, she hopes to break into the senior Team GB team and her dream is to compete in the 2024 Olympic Games in Paris.

She combines her academic studies at Durham University with more than 20 hours of rowing training every week.

“It is challenging to balance everything but when we have time between sessions we get our laptops out and do half an hour’s work. My course tutors and rowing coaches are all very supportive.”

Wade Hall-Craggs, Senior Rowing Coach at Durham University Boat Club, said: “It is great that Lauren had such a positive experience of the JHPA and is now devoting her own time to supporting younger rowers. She is a credit to herself, her family, her school and college.

“Lauren is an extremely talented rower and we have high hopes that she will fulfil her dream and represent Team GB – and Durham University – at the Olympics.”

Mr Hall-Craggs said: “We have been running the JHPA for several years now and we are very proud of its success and students, who enjoy the programme greatly. They get out of it as much as they put in.

“The programme is very popular with local schools and clubs. It is a great example of the University and region working together.”

The next JHPA will take place in early 2019. Further details will be announced nearer the time.