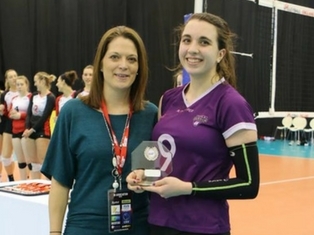 A DURHAM University student who has devoted many hours to helping young people enjoy sport and physical activity has won a national award for her volunteering.

As if that was not enough, she has also helped run school holiday camps and coaching sessions, as well as leading Durham University Volleyball Club.

Now she has been named Young Volunteer of the Year in the 2018 Volleyball England Awards.

The 22-year-old, from London, said: “I was really happy to win. But I wasn’t doing any of this for recognition. I was just doing it for fun and to make a difference.”

She applied to study Physics at Durham University so she could combine her sporting passion with a high-quality degree programme. The Physics Department is among the top 100 in the world, in the QS World University Rankings 2018.

Now a fourth year undergraduate, she receives a £2,000-a-year Vice-Chancellor’s Scholarship, which has helped with her living, travel and sporting costs.

The Collingwood College student either plays or trains for up to three hours a day, seven days a week.

Her community work at Durham began when she helped run a volleyball tournament for local cadets. She has also helped run a six-week coaching programme for primary school pupils, physical activity sessions for children aged five and six and the Team Durham holiday camps in summer 2017.

She received her award from Volleyball England after recent National Cup Finals.

Dave Coldwell, Durham University’s Deputy Director of Sport (Participation), said: “We are absolutely delighted that Sophie has been recognised for the countless hours she has given to Durham University Volleyball Club.

“It is thoroughly deserved and her hard work has certainly produced fantastic results increasing the number of people who play volleyball, both at the University and in the wider Durham community.

“We thank Sophie for the time she has given over the past four years and congratulate her on this prestigious award.”

As well as her community volunteering, Miss Szyszko has worked hard to develop volleyball participation among Durham University students.

Her Young Volunteer of the Year Award citation read: “Sophie has been an incredible ambassador for volleyball throughout her four years at Durham University.

“Amongst a long list of achievements and service described as ‘nothing short of exemplary’, Sophie has been instrumental in building community links for volleyball, particularly an annual six-week PE block with a local primary school, increasing the number of BUCS teams at Durham, ensuring the long-term survival of the intra-mural volleyball league at the University and promoting the inclusion of volleyball facilities within Durham’s new sports build.

“A continuous inspiration in many different areas of volleyball, Sophie’s contribution to volleyball at Durham University has been ‘exceptional’.”